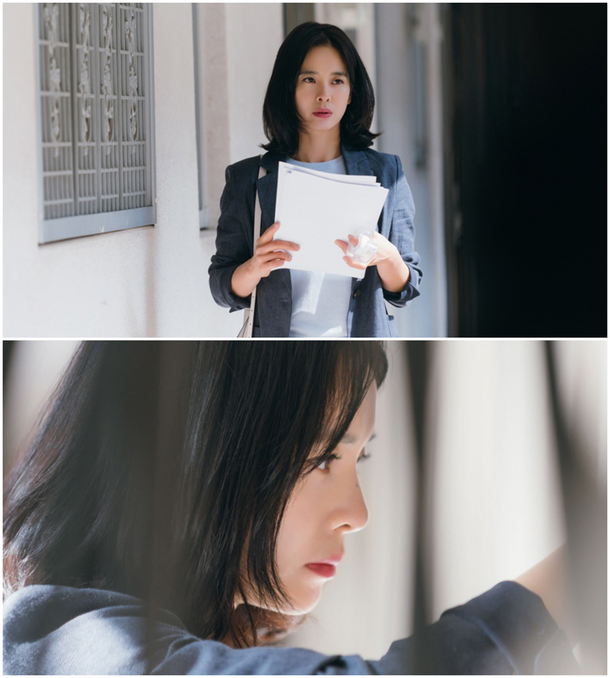 Jung Hye-young is back with a drama, "The Goodbye Has Left", for the first time in 5 years.

It is based on a web-novel about two women, married and single, in their 20s and 50s, living with their husband and boyfriend and going through conflicts, marriage and pregnancy.

Jung Hye-young is a well-off stewardess named Kim Se-young with a daughter whose mistake completely changes their entire lives.

"The Goodbye Has Left" is her first drama in 5 years since the 2013 MBC drama "The Gu Family Book".

The pictures of Jung Hye-young show her hanging fliers with a weary face. Her hair is messily worn and she's wearing a loose T-shirt under a simple jacket.

Jung Hye-young has been excited to play Kim Se-young since before the production began. She went around with a smile on her face and greeted everyone on set before work began.

Although she was nervous about "The Goodbye Has Left" as her first drama in 5 years, she was eager as Kim Se-young and completely transformed into her new character as soon as the sign was given.

After the first take, Jung Hye-young said, "I decided to star in "The Goodbye Has Left" because I was touched by writer So Jae-won's description of women. I hope my performance of a mother's love for her child can be delivered to the viewers".

Meanwhile, "The Goodbye Has Left" begins on the 26th of May.

""The Goodbye Has Left" Jung Hye-young's Bold Transformation "
by HanCinema is licensed under a Creative Commons Attribution-Share Alike 3.0 Unported License.
Based on a work from this source