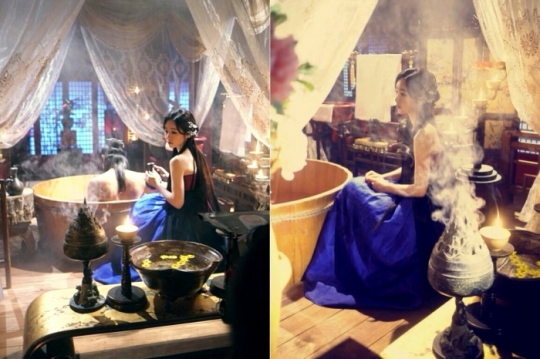 The actress appeared on the KBS 1TV drama "The Great King's Dream" elegantly. A provocative scene of her was revealed by her agency. She is sitting in a wooden tub, steaming from the hot water she's taking a bath in .

Hong Soo-ah is playing the role of gisaeng Yeon-hwa. She is a character burning with the passion of avenging her mother Queen Seung-man (Lee Young-ah) and fulfilling Bi Hyeog-rang's (Jang Dong-jik) ambition.

Meanwhile, Hong Soo-ah's bathing scene with be shown on the 9th at 9:40PM.

""The Great King's Dream" Hong Soo-ah reveals bathing scene"
by HanCinema is licensed under a Creative Commons Attribution-Share Alike 3.0 Unported License.
Based on a work from this source