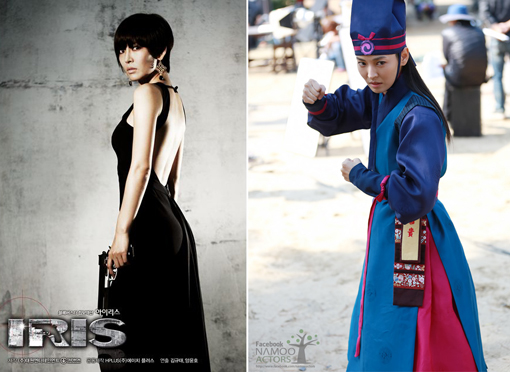 To entertain those staff who were tired from a long day of filming and shooting, Kim So-yeon put on a neat set of uniforms and held her fists together.

Kim So-yeon took on the role of strong and charismatic character in the 2009 drama "IRIS" although now she is a clumsy one in the drama "The Great Seer".

She performed the actions moves she did during "IRIS" for those taking a break and brought a lighter atmosphere around.

Kim So-yeon's "The Great Seer" is based on the Goryeo times about the kingmakers who made Lee Seong-hye king. This drama can be seen every Wednesday and Thursday at 9:55PM.

""The Great Seer" Kim So-yeon in action wearing uniform "
by HanCinema is licensed under a Creative Commons Attribution-Share Alike 3.0 Unported License.
Based on a work from this source