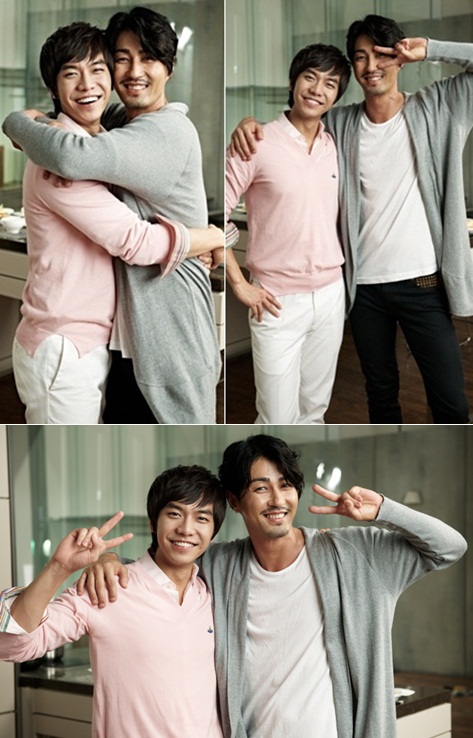 Actors Cha Seung-won and Lee Seung-gi met again for an advertisement after the drama.

Modeling for Samsung Zipel Asak, Lee Seung-gi joined hands with Cha Seung-won in this advertisement and displayed unusual friendship with him.

Samsung Electronics revealed a cut of Lee Seung-gi and Cha Seung-won from the advertisement for the 2012 Zipel Asak Kimchi Refrigerator.

In the picture, the two are hugging each other playfully and smiling widely. They have drawn 'V's with their hands and looks like they have something fun going on.

The two managed to pull off a scene where they share some Kimchi together according to the contract and they even spent the break time together.

Modeling for Zipel 3 years straight, Lee Seung-gi said, "I am so happy to have met a respectable senior again in following the drama. He's a good leader and I am comfortable".

Cha Seung-won said, "This is the first time I've hugged a man in a commercial. I've heard he was well mannered and upright and now that I've met him, I agree".

Their advertisement can be seen through the Samsung Electronics homepage on the 25th of August.

""The Greatest Love" Cha Seung-won and Lee Seung-gi"
by HanCinema is licensed under a Creative Commons Attribution-Share Alike 3.0 Unported License.
Based on a work from this source