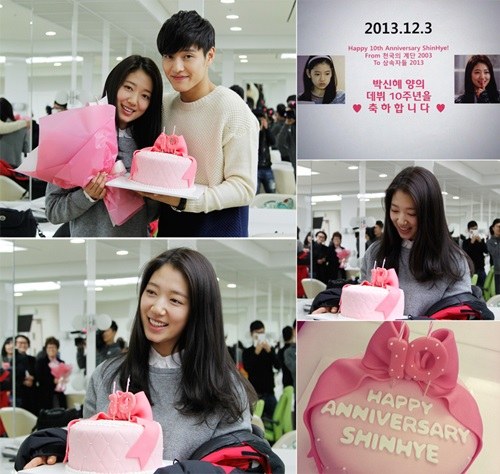 Park Shin-hye celebrated her 10th anniversary on the set of the SBS drama "The Heirs".

Debuting as a young actress in the 2003 drama "Stairways to Heaven", Park Shin-hye celebrated her 10th debuting anniversary on this day.

Her aency S.A.L.T Entertainment prepared a surprise party for her on the set of the drama.

Park Shin-hye received a pink cake with a '10' candle and flowers. She also posed with Kang Ha-neul who plays Hyo-sin in the drama.

She shared her party snacks with everyone on site and was still happy throughout the late night filming. International fans also celebrated with her, for the past ten years and another future ten.

Park Shin-hye posted on her SNS, "Thank you all for the support. This year has been full of great things and I think this is the perfect end to it".

Meanwhile, the seventeenth episode of the drama "The Heirs" can be seen on the 4th at 10PM.

""The Heirs" Park Shin-hye celebrates her 10th"
by HanCinema is licensed under a Creative Commons Attribution-Share Alike 3.0 Unported License.
Based on a work from this source