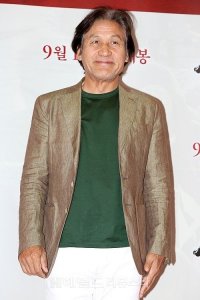 In the last few years, Korean films, TV dramas and pop music have become immensely popular abroad, a phenomenon known as the Korean Wave. This is the 28th in a series of essays by a select group of scholars and journalists looking at the spread of Korean pop culture in Southeast Asian countries and beyond. - Ed.

Ahn Sung-ki seems perennially calm and collected. A gentle smile on his face, he does not raise his voice even when he talks about the turbulent developments pummeling the Korean cinema in recent months. But his concerns are genuine because, in his view, the local film industry is in deep trouble and the future outlook remains gloomier than ever.

After all, with more than 150 movies under his belt, Ahn is one of a few Korean actors who represent the entire Korean film industry, which was once a mighty growth engine of the Korean Wave, or "Hallyu".

"People talk about the decline of the Korean Wave, but my opinion is that it has overheated too quickly and it's finally returning to a normal level", Ahn said in an interview with The Korea Herald.

"Up until now, none of us had any idea about how to handle the Korean culture boom, nor did we expect the fever to cool down so fast".

Ahn said some Korean filmmakers rushed to cash in on the Korean Wave boom, a shortsighted move that resulted in greater losses. Lately, the number of new Korean movies is plunging, while exports to key markets such as Japan remain sluggish.

Investors who once dreamed of hitting it big on the film arena are now looking at their empty pockets helplessly due to the sudden slump that caught most filmmakers, production houses and distributors off guard.

"Trust is the most important element in doing any business, including movies, and that trust should be nurtured in the long term", Ahn said, referring to the eroded trust in Korean films that failed to live up to expectations in overseas markets.

Ahn also pointed to the lack of consideration for foreign markets. A growing number of foreign audiences outside of Korea are drawn to Korean films, but local filmmakers and actors do not pay much attention to the foreign markets.

"We should take initiatives in taking care of the quality of our movies for the sake of our foreign audiences. This is a crucial issue, but we have been so far negligent about this issue", he said.

For Ahn, nothing is more futile than a short-lived success, and anyone who has a doubt about his conviction should take a look at his 51-year-long career as a professional actor.

Ahn started as a child actor - an immensely successful one. He was so popular that he played roles in as many as 70 films by the time he turned 14 in 1965. Realizing his limitation as a child actor, he announced his retirement in that year.

Thirteen years later, in 1978, Ahn made a comeback by taking up a role in director Kim Ki-young's "The Soldier and Girls". Unfortunately, the country was under a military dictatorship, and the movie did not make it to theaters at all, and nobody noticed Ahn's misfired attempt to return to the cinema field.

His comeback turned out to be utterly disastrous, but what's more shocking to Ahn was the absence of familiar faces.

"When I made a comeback, I realized that all the famous and powerful filmmakers were sidelined to the marginal area in just 10 years. I felt sort of empty about the cycle in which nobody can stay strong for eternity in the movie industry", Ahn said.

Ahn, since then, has been pursuing his peculiar strategy, which revolves around an optimal balance between popularity and failure. He is rarely in the brightest spotlight in a movie project; he is never completely sidelined as a has-been. And this move has been remarkably prescient because he has weathered a stormy 51 years as an actor and, more importantly, he is widely regarded as a leading Korean actor who symbolizes the Korean cinema.

Ahn said Korean filmmakers and actors should be more prepared for the cycles.

"Just as the stock market fluctuates, the film market also goes through a cycle. Now, local movies are stuck with the slump, but I expect a recovery to come in the future", he said.

As for the deep skepticism and sense of crisis facing Korean movie directors and actors, Ahn said the current downturn came as a great shock because the most recent upturn was so dramatic.

"Starting from the late 1990s to 2006, the Korean film industry enjoyed the biggest boom ever", Ahn said. "Now that we have gone though the painful trials and errors, I hope we can take long-term measures".

One of the much-needed long-term measures is steering more attention to the Asia-wide projects. In 2006, Ahn himself joined a multinational project involving Korea, Japan and China.

In "A Battle of Wits" (Mukgong), a Hong Kong historical action flick based on a Japanese historical novel, Ahn worked with other Asian actors such as Andy Lau, Fan Bingbing and Nicky Wu, under the auspice of director Zhang Zhiliang.

"Korea is better positioned for this type of a joint film project featuring Asian culture and languages. After all, Northeast Asian countries like Korea, China and Japan share similar cultures as well as Chinese characters.

"Although my role in the movie project was relatively minor, I believe that we can do much more in the future, drawing on trust we have built through the project", Ahn said.

The problem with the local market is also related to the idea of trust. At the height of the Korean Wave boom, too much money was funneled to the local market, and, as a result, even sloppy projects ended up grabbing sizable funds.

When the bubble burst, investors went into the once bitten, twice shy mode - becoming deeply suspicious about Korean film projects.

The lost of trust is taking its toll on the number of films produced. Local filmmakers estimate that about 70 films should be produced annually to bolster the industry's average turnout, but if the current slump continues, about 40-50 movies are expected to be made this year.

Ahn said what's important is to keep the movie industry on a normal track, and to that end, the government should take aggressive measures to deal with the illegal piracy of films on the internet so that filmmakers can diversify their source of profits.

"[THE HIGH TIDE OF THE KOREAN WAVE(28)] Ebbing tide of Hallyu slows film industry"
by HanCinema is licensed under a Creative Commons Attribution-Share Alike 3.0 Unported License.
Based on a work from this source