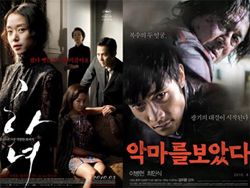 Korean films are gaining more attention abroad with each passing year. Both of the films "The Housemaid - 2010" and "I Saw the Devil" will be included in this year's Toronto International Film Festival.

The movie "The Housemaid - 2010" -- which stars Jeon Do-yeon and was directed by Im Sang-soo -- is seeing it's second international event as it was also included in the most recent Cannes Film Festival. Seven separate distributors competed to win the right to show the film in North America. US-based IFC Films won the bid and there are high expectations for the movie to do well at the box office when it finally premieres. At the Toronto International Film Festival, "The Housemaid - 2010" was invited to be shown in one of the main categories while "I Saw the Devil" will be shown in the Special Presentation section. This will mark the first time the latter film, starring Lee Byung-hun and Choi Min-sik, is shown in North America.

The Toronto International Film Festival will be running from September 9-19. This festival is considered to be within the top four film festivals in the world, along with the likes of the Cannes, Berlin, and Venice film festivals.