The Kings of the Chosun 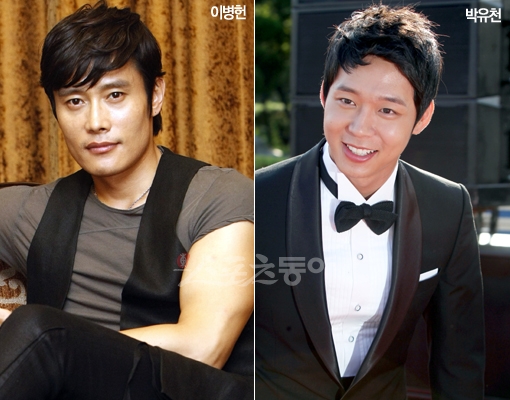 Lee Byung-hun's "King of Chosun" to be released in fall

Ju Ji-hoon's upcoming "I Am a King"

Park Yoo-chun in "The Rooftop Prince"

Hwon isn't the only king of Chosun.

We are going to see various kings from the Chosun times in theaters and on home screens.

The kings to follow King Hwon (Kim Soo-hyun) from the high rating MBC drama "The Sun and the Moon" are endless. Lee Byung-hun and Ju Ji-hoon will take over theaters as kings and Park Yoo-chun will follow in the steps of Kim Soo-hyun.

Lee Byung-hun will come back with movie "The King of Chosun" which is about Gwanghegun who was well known as a tyrant. This movie under the concept of 'king and beggar', is a fiction historical about the sick king replacing himself with a clown that looks like him. Lee Byung-hun has many looking forward to how he will portray the 'king of Chosun' that has become a craze.

Ju Ji-hoon will join the King of Chosun line with the comical movie "I Am a King". This movie also deals with subject matter of the king and the beggar changing roles. Ju Ji-hoon showed unusual enthusiasm for this movie.

Dramas are also another thing. Park Yoo-chun will act out the role of an imaginary prince from the Chosun times who looks for his lost wife in the SBS drama "The Rooftop Prince". He is going to be a fool for love who sets out to find his lover 300 years into the modern times.

"The Kings of the Chosun"
by HanCinema is licensed under a Creative Commons Attribution-Share Alike 3.0 Unported License.
Based on a work from this source