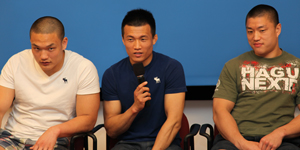 Today the Korean Cultural Center was host to a press conference for UFC fighter Chan Sung Jung, the "Korean Zombie" himself. Since Jung's debut, he has won many matches as well as much popularity with fans of mixed-martial arts fighting (MMA) for his aggressive and unrelenting fighting style. Now he will be the first Korean to headline a major UFC event when he fights Dustin Poirier on May 15th at George Mason University's Patriot Center.

Jung was accompanied by coach Donjin Ha, also co-owner of MMA group Korean Top Team which Jung is a part of along with fellow Korean fighter Dongi Yang. Yang will be fighting at the event as well, making it the first time two Korean fighters have appeared on a UFC match lineup.

Jung and Team arrived in the U.S. on May 5th, and he has been in Northern Virginia preparing for the match by fighting at multiple gyms in the area. Jung did not visit Washington, DC until yesterday, where he says he and his team mates took pictures of the Washington Monument. They posted pictures of themselves on Facebook, which was noticed by a couple of local fans in the area who own a restaurant on Pennsylvania Ave. Nonetheless, the group ate well that day.

Coach Donjin Ha said that ever since starting in UFC, Jung has focused on fighting the toughest athletes in order to work his way up the ladder. Jung's fighting career began as a shy insecure child whose aunt took him to Korean kickboxing lessons in order to learn confidence. Jung, who trains 5-6 hours a day, says this is one of the advantages of the sport. Despite its often violent matches MMA is very accessible, in "that anyone can learn it and they train hard enough".

"The "Korean Zombie" Visits the Korean Culture Center"
by HanCinema is licensed under a Creative Commons Attribution-Share Alike 3.0 Unported License.
Based on a work from this source