"The Last Empress" Ends Dramatically With Bombs, Pain, and Death

The final episode of the SBS drama "The Last Empress" was broadcast on the 21st in which Lee Hyeok (Shin Sung-rok) and Na Wang-sik (Choi Jin-hyuk ) die and the Queen (Sin Eun-kyung) and Seo Kang-hee (Yoon So-yi) are sentenced to death.

Oh Sunny (Jang Nara) woke up a week after the bomb incient. Lee Hyeok told her Na Wang-sik was framed as the bomber, but he'd already died with the bomb. The Queen didn't know this and opened a seARCH for him while framing Lee Hyeok for drugs and murder.

Lee Hyeok knew that Na Wang-sik had prevented mass casualties by taking the bomb with him and decided to avenge his death. The queen assumed Na Wang-sik was going to do something and ordered the drug factory to be burnt down. She would test drugs on people and when they overdosed, she would drown them in the sea of Chunggeumdo. Lee Hyeok disguised himself as Na Wang-sik in bandages.

Min Yoo-ra was there too with the antidote. She stabbed Mr. Pyo with a poison shot and Sunny asked him for the Queen's secret if he wanted to live, but he claimed he didn't know. Then he tried to attack her from behind but Min Yoo-ra got in his way and fell to the ground. Min Yoo-ra said to Sunny, "Don't misunderstand. I didn't try to save you. I got my revenge and I got my punishment for what I did. Don't be thankful and don't be sorry", and died.

Lee Hyeok who saved people from the factory, was cornered. The Queen, who thought he was Na Wang-sik, shot him. When she found out it was Lee Hyeok, she was terrified. Before he closed his eyes, Lee Hyeok said to Oh Sunny, "I thought I wouldn't be able to see you one last time. I'm sorry I wasn't a good emperor or a good husband. I wish we had met on different terms. Thanks for marrying me. I love you".

The Queen and Seo Kang-hee (Yoon So-yi) didn't know the police were listening and argued, airing each others' dirty laundry. In the end, the Queen was charged with conspiracy to commit murder, attempted murder, and others while, Seo Kang-hee was charged with the murders of Queen So-hyun, and the attempted murders of Kang Joo-seung (Yoo Gun) and Lee Yoon (Oh Seung-yoon). Oh Sunny told them they got what they deserved and the Queen said, "I should have killed you first".

The two were sentenced to death. Oh Sunny held a press conference and said, "There is no value in the Imperial Family anymore. As of this moment, I give up all the rights of the Imperial Family and any member of it who has committed crime will pay the price. Matters of abolishment will be announced through the Board of Inspection".

A year later, Oh Sunny was living an ordinary life with Ah-ri (Oh Ah-rin). The Imperial Palace became a museum and Min Yoo-ra, who was thought to be dead, was alive although the blow to the head had rendered her quite dull. She was happily living with Dong-sik (Oh Han-gyeol). The Queen still thought the Imperial Palace was hers and led a poor prison life being bullied by others.

The drama was known for its dramatics, a combination of writer Kim Soon-ok and director Joo Dong-min. It was in the popular ranks with an average viewing percentage of 17.9%, but the continuous rape, kidnap, murder and the boring storyline towards the end were too much for the viewers. When the drama made a decision to extend four more episodes, Choi Jin-hyuk declined to participate.

The final episodes of the drama ended with 14.1% and 16.5%. However, the ending wasn't all that satisfactory.

Meanwhile, "Big Issue" starring Joo Jin-mo and Han Ye-seul comes out on the 6th of March. 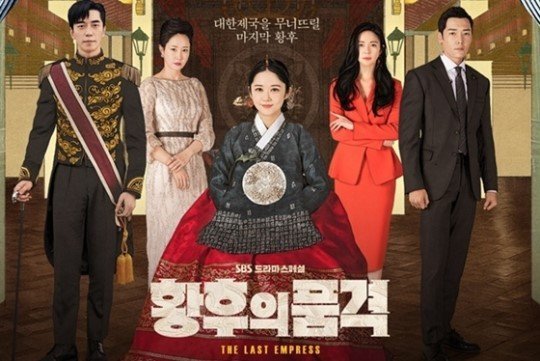 ""The Last Empress" Ends Dramatically With Bombs, Pain, and Death"
by HanCinema is licensed under a Creative Commons Attribution-Share Alike 3.0 Unported License.
Based on a work from this source