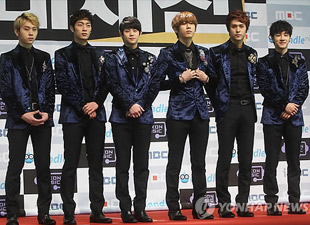 Cube Entertainment recently won its lawsuit against the Ministry of Gender Equality and Family (MOGEF) revolving around Beast's hit song "On Rainy Days" from their last album "Fiction And Fact" in the summer of 2011.

The MOGEF had banned the song back in July last year for a line that sang, "I think I'm drunk, I think I should stop drinking". The ministry deemed it inappropriate for minors or children saying that it could potentially encourage them to drink.

Cube fought back by taking the case to court. The agency argued that the lyrics don't specify any real details of drinking and that the line "I should stop drinking" doesn't encourage the act. The court took Cube's side and ruled that the MOGEF retract the ban.

More on Beast, the group will start their world tour with their Seoul concert on February 4-5th.