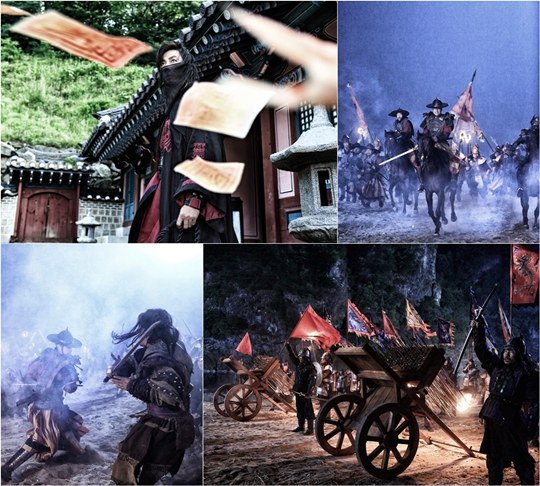 Still cuts from the new MBC drama "The Night Watchman" were revealed.

"The Night Watchman" deals with a unique subject which has never been dealt with before in a drama and has drawn attention since before production. While curiosity builds on the fact that no one has attempted on anything like this, the stills of the drama already raises anticipation with its overwhelming visuals.

Leader of The Night Watchman Jo Sang-heon's (Yoon Tae-young) sharp eyes seen through the flying talismans gives the feeling of coercion. He gives off an aura too strong for anyone to approach him like a warrior who's travelled a long way to conquer his enemies and there's a dynamic aura which resonates within him.

Stills of the drama also draw attention to its action scenes. The Night Watchman stand against various ghosts and sends chills down the audiences spine in the hot summer weather.

"The Night Watchman" is also being called the new generation of historical dramas as it is bundled up with an unprecedented cast of youthful characters based in the Joseon times. Lee Rin (Jung Il-woo) is a prince who sees ghosts, Moo Gwan (Yunho), a cold male character, Do Ha (Ko Sung-hee), an unruly girl from the mountains, Soo Ryeon (Seo Ye-ji), a two-faced character, and many more.

"The Night Watchman" is also the creation of writer Yoo Dong-yoon who wrote "The Great King's Dream" and "King and I" and producer Lee Joo-hwan from "Jumong" who has been successful in every drama he's produced.

Lemon Rain says, "The process is going well and everyone, including cast and crew, is working hard to make this possible".

Meanwhile, "The Night Watchman" will be broadcasted on the 28th of July after "Triangle - Drama".

""The Night Watchman" stills"
by HanCinema is licensed under a Creative Commons Attribution-Share Alike 3.0 Unported License.
Based on a work from this source