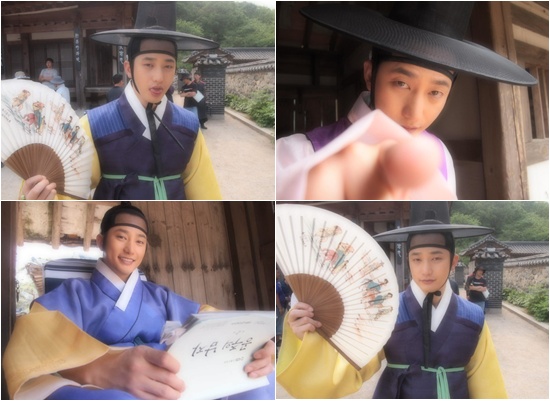 Actor Park Si-hoo revealed a on site picture for "The Princess's Man".

In the picture is Park Si-hoo as Kim Seung-yoo, reading his lines, tired from the hot weather and fooling around, totally different from the character he is supposed to be in the drama.

Those who have seen his picture say, "Good job in the hot weather", "I can believe it now that I see it like this, I wish July comes quickly", "I'm looking forward to "The Princess's Man"", "Young Master Seung-yoo, take care of yourself" and more.

Park Si-hoo has been working hard traveling all over the nation and said that the drama feels good after the first shoot.

KBS "The Princess's Man" with Park Si-hoo and Moon Chae-won will be broadcasted on the 20th of July after "Romance Town".

""The Princess's Man" Park Si-hoo looks good in ancient costume"
by HanCinema is licensed under a Creative Commons Attribution-Share Alike 3.0 Unported License.
Based on a work from this source