"The Rooftop" Micky Yoochun and Han Ji-min so 'close' 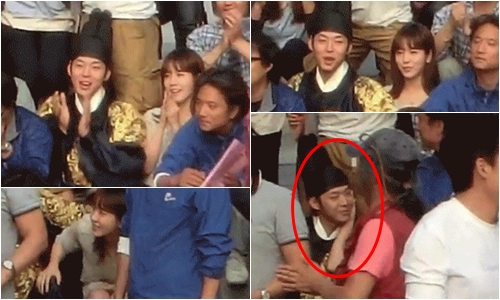 A video titled, "Park Ha touches Lee Gak's face while taking group picture". This video's contents shows the whole "Rooftop" group getting together to take a group picture after the final reunion scene of Lee Gak and Park Ha.

The two played the roles of very sweet lovers who loved each other so much despite the difference in time zones and have been greatly supported by the viewers. They were seen taking care of each other and touching each other with encouragement.

Those who have seen the video say, "The way she's touching his face is so affectionate", "They look like a sister touching her younger brothers face" and more.

Meanwhile, the finale episode of the drama "The Rooftop Prince" rated 14.7% on the 24th and landed itself in first place.

""The Rooftop" Micky Yoochun and Han Ji-min so 'close'"
by HanCinema is licensed under a Creative Commons Attribution-Share Alike 3.0 Unported License.
Based on a work from this source