The Secrets of A Movie Star's Hair 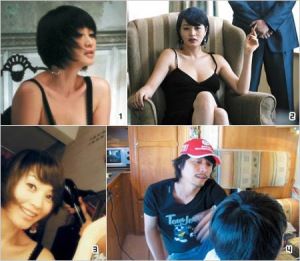 Actress Kim Hye-soo is on everyone's radar again, though this time not because of her provocative, glamorous fashion, but because of the chic hairstyle she's been sporting as a femme fatal casino hostess in the hit film "Tazza: The High Rollers". The Chosu Ilbo asked hairstylist Min Sang, who created Kim's hairstyle, to share his secrets.

Kim has The Classic round face, typical in Asia and strikingly effective in the movie, with her bobbed hair making her face look sharp, slick and sophisticated. Her hairstyle has quickly become the most requested style for most women visiting hair salons for the autumn season.

Every woman dreams of having shiny, healthy hair like in the movies, though in reality few women are so lucky. Most Asians in fact do not have naturally straight hair, and today few of them have time to dry their hair naturally without a hairdryer. Hair today gets damaged more easily with little time to care for it properly, resulting in brittleness and split ends.

Taking care presents as big a challenge as taking care of skin or body figure. Particularly in the case of dry, curly hair, the effort required is doubled. A worthwhile introduction therefore for those with hair of this kind is a perm called "magic straight". Many of us have had a perm at least once in our lives, but it is less popular in light of the time it takes -- some four to five hours to complete, harming the hair more than with other treatments. Another reason is that the perm gives a strong impression that it is artificially styled, which goes against the current trend of emphasizing naturalness. Another draw back is that the procedure doesn't make thin hair voluminous.

Kim's hairstyle in "Tazza: The High Rollers" is designed to create a flowing voluminous hairstyle by complimenting these defects of the magic straight perm. It straightens hair, transforming it into a bob-style with a C-shaped curve at the end. It is just the right style for those who have fluffy curly hair but want a style that makes them look sharp and sophisticated. It is particularly effective for those with a round face, as it makes the face look smaller. Also it costs relatively little and requires less time, doesn't cause much damage to the hair and is easy to take care of.

With the passage of time, the standards of beauty and desire have evolved. For a decade between 1985 and 1995, it was the face that was most important, until the figure took over for five years until 2000. Since then, the hairstyle has been considered one of the most important elements in beauty.