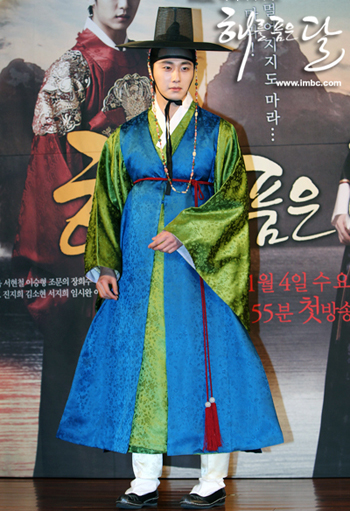 Actor Jung Il-woo played the role of casting director for new MBC drama "The Sun and the Moon".

There is a character called Woon in the drama who, as a bodyguard, follows Lee Hwon (Kim Soo-hyun) around like a shadow. With his unique appeal, Woon has already gathered several female fans from the original novel and entertainment companies are fighting to get their candidates into this role.

The one person who was greatly involved with the casting of Son Jae-rim was Jung Il-woo, who takes on the role of Yang Myeon-goon, older brother to Lee Hwon.

Song Jae-rim attended the press release event of the drama on January 2nd saying, "It is said that Jung Il-woo told the production team that I was right for the role of Woon".

Jung Il-woo said, "I was happy to hear that he had been cast after me. I think the character suits him and that we can work well together".

Based on an original novel, "The Sun and the Moon" is set in historical Chosun times and follows the love between imaginary king Lee Hwon and exorcist/shaman Wol.

The other cast members include Han Ga-in, Kim Soo-hyun and more.

""The Sun and The Moon" Jung Il-woo and Song Jae-rim "
by HanCinema is licensed under a Creative Commons Attribution-Share Alike 3.0 Unported License.
Based on a work from this source