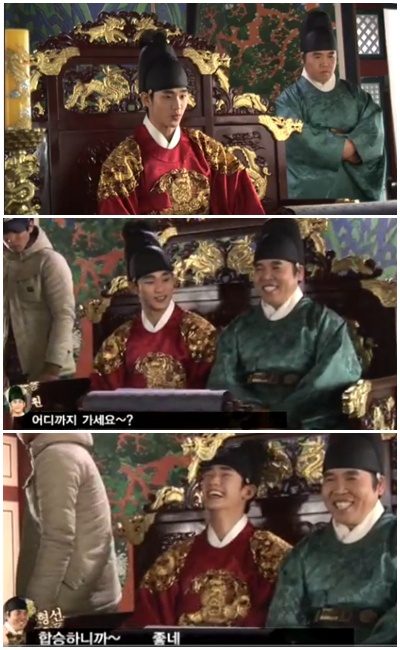 Actor Kim Soo-hyun and Jung Eun-pyo are creating laughter with their sketch comedy.

The two are playing the roles of Chosun's imaginary king Hwon and the eunuch Hyeong-seon in the MBC drama "The Sun and the Moon".

A video of them was released on the official homepage for "The Sun and the Moon".

Under the fictional scenario of 'The Royal Taxi', Kim Soo-hyun started the skit by asking "Where are you going?" and Jung Eun-pyo replied in a funny accent, "Sindorim".

Kim Soo-hyun made several ad-libs, saying, "Do you always dress yourself like this? It looks very hard to wash". Jung Eun-pyo replied, "I wore it for a special Lunar New Year occasion. I am from Yongin but I live in the Korean Folk Village".

He added, "Ah~ you're the second son of the public house in the Folk Village! I thought I saw you somewhere. You dance a little right?" Kim Soo-hyun couldn't stop laughing at Jung Eun-pyo.

Meanwhile, "The Sun and the Moon" is riding high with good performances by its cast and support from viewing fans. The previous tenth episode of the drama rated 37.1% and the show is looking towards a 40% rating. 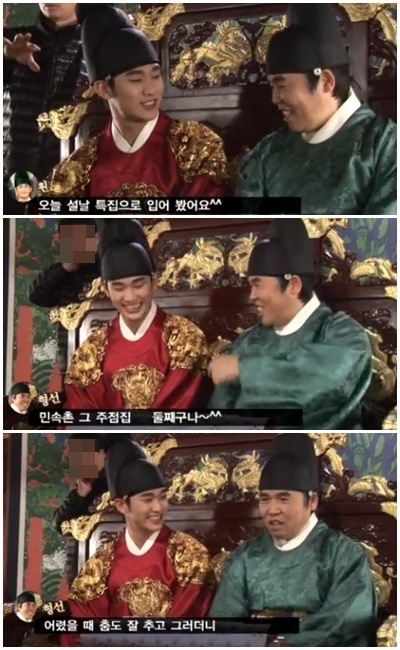 ""The Sun and the Moon" The couple of Hwon and Hyeong-seon hang around the set"
by HanCinema is licensed under a Creative Commons Attribution-Share Alike 3.0 Unported License.
Based on a work from this source