The Three Heroes of "Strangers From Hell", 100% Synchronization, 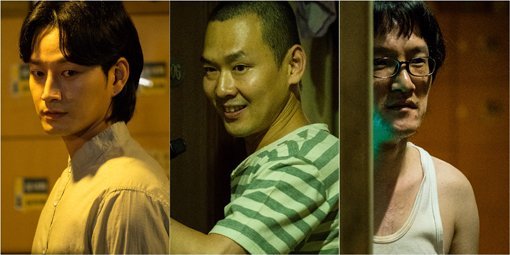 The cast of the OCN drama "Strangers from Hell" has drawn attention with their distinctive characters. We're talking about the three heroes Lee Hyun-wook-I, Park Jong-hwan and Lee Joong-ok. They're not familiar faces, and even less so familiar names. Despite unfavorable conditions, they depend on their acting experience to carry out their characters and show their presence to the fullest, leaving a strong impression that doesn't fall short of Im Si-wan, Lee Jung-eun and Lee Dong-wook.

Lee Hyun-wook-I aroused curiosity with the secret figure behind the creepy smile. He looks normal on the outside, but he's actually in control of the people living in the run-down gosiwon. He synchronizes perfectly with the 'big eyed' character in the original webtoon. Lee Hyun-wook-I is a graduate of the department of acting at the Korean National University of Arts and has mostly been in theater. He's also appeared in movies "No Tomorrow" and "The Target".

Park Jong-hwan's laughter alone builds tension and horror. His odd laughter, serious stuttering and actions hint at an intellectual disability. However, he is cruelly violent, and his identity is expected to slowly be revealed in the future. In fact, he plays two roles as the other twin who is "normal".

Lee Joong-ok appeared in the 10 million viewer hit movie "Extreme Job" as the drug addict who goes face to face with Ryu Seung-ryong. However, in "Strangers from Hell", he is a complete pervert.

PD Lee Chang-hee said, "The actors have understood every single detail of their characters, making the synchronization stand out even more".

"The Three Heroes of "Strangers From Hell", 100% Synchronization, "
by HanCinema is licensed under a Creative Commons Attribution-Share Alike 3.0 Unported License.
Based on a work from this source