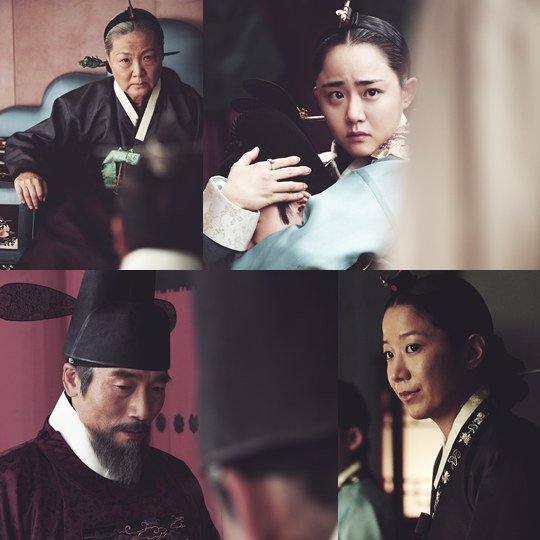 Stills of the movie "The Throne" were released on the 25th.

The stills were of Moon Geun-young, Jeon Hye-jin, Kim Hae-sook, Park Won-sang and others.

Moon Geun-young plays Princess Hye-kyeong who gets married to Prince Sado at the age of ten and develops a dilemma as his wife and mother of Jeong Jo. To protect her son from Sado and Yeong Jo, she persuades her mother-in-law The Queen and disregards her husband's death.

Kim Hae-sook is Yeong Jo's stepmother and Queen In Won who adores Sado. Her performance has weight as she conflicts with Yeong Jo who tries to drive out Sado.

Jeon Hye-jin plays Sado's birth mother but gets killed by her husband. She pleads to her husband about her son's mistakes like any affectionate mother would do.

Park Won-sang plays Queen Hye-kyeong's father and Sado's father-in-law named Hong Bong-han. On the outside he lives up to Yeong Jo's expectations and works for government reformation but has to keep silent about his son-in-law's death for the sake of family honor.

Director Lee Joon-ik said, ""The Throne" follows the psychological patterns between people and looks into the lives of people who do their best to protect their families".

"The Throne" is the story of Prince Sado who died 8 days after being shut in a chest by his own father. Prince Sado only wanted to be a son to his father who had to be King. The movie comes out in September.

""The Throne" Lee Joon-ik, "Moon Geun-young and Kim Hae-sook's acting was intensified""
by HanCinema is licensed under a Creative Commons Attribution-Share Alike 3.0 Unported License.
Based on a work from this source