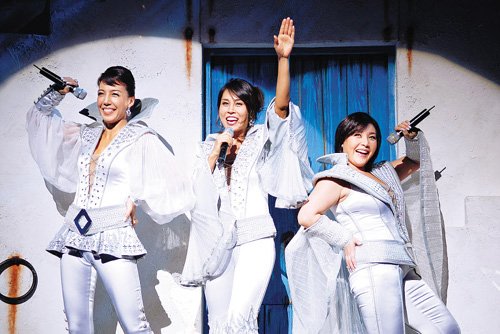 "Mamma Mia!" the smash hit musical based on the songs of ABBA, recently celebrated its 10 anniversary in Korea with a special show.

At the end of the performance at a theater in Seoul on Sunday, Korean musical stars such as Choi Jeong-won-I, Jeon Soo-kyung and Lee Kyung-mi-I surprised fans by taking to the stage for a group rendition of ABBA's "Dancing Queen". They were joined by other members of the British cast from their international tour.

Since the musical made its Korean-language premiere in January 2004 it has been staged in 33 cities nationwide. It has been performed 1,287 times, attracted 1.71 million spectators and earned W107 billion (US$1=W1,080) in ticket sales. Middle-aged theatergoers in their 40s or over led the ticket sales, taking up over 70 percent of the seats.

The success of "Mamma Mia!" is largely based on its repertoire of 22 hit songs by Swedish pop group ABBA, a band that enjoyed huge popularity in Korea in the 1970s. The 160-minute show served as a pleasing nostalgia trip for many who went to see it. Also, the story of a bride-to-be and her search for her real father touched the minds of older people.

The musical's long-running popularity is also linked to Korean producer Seensee Company's efforts to tailor it to local tastes through a fresh and fun adaptation, rather than rigidly adhering to the original script.

The original U.K. production of "Mamma Mia!" will keep playing at Blue Square in Seoul until March 23. For more information, call 1544-1555.