This fall, acting VS comedy VS grinding 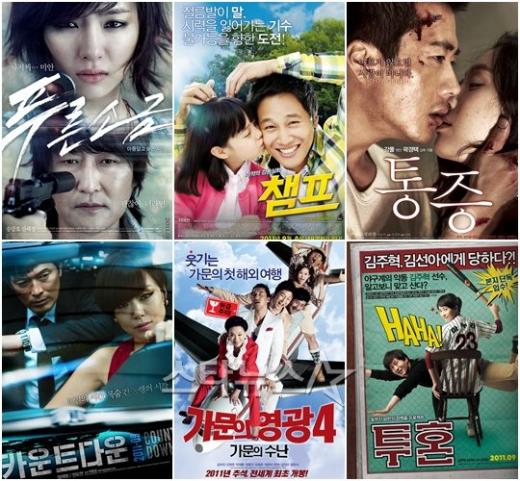 The curtains have raised for the movies this Chuseok. It seems like there's going to be a tense competition amongst highly looked-forward-to movies this fall.

Starting with "Hindsight" being released on the first of September, "Pained", "Marrying the Mafia IV - Family Ordeal", and "The Day He Arrives" will greet audiences all at once n the 8th. Movies, "Countdown", "Fighting Spirit", "Silenced", "The Client" and more are coming soon.

◆The 'Gods' have returned

The first things that catches the attention is the return of skilled actors and actresses. "Hindsight" is a movie by Song Kang-ho, actor of actors in Korea. He returns as a man who wants to hide his past and live a quiet life along with "High Kick Through The Roof" actress Shin Se-kyung. The way the two have their guns pointed at each other reminds us of "Leon".

'Queen of Cannes' Jeon Do-yeon returns with Jung Jae-young in "Countdown". Coming at the end of September, Jeon Do-yeon is a beautiful fraud who speaks nothing but lies. Another actor of actors Jeong Jae-young acts with her 9 years after 2002 movie "No Blood No Tears".

◆There should be a touching story behind the laugh

Laughter can't be left out this Chuseok. The creator of the "Family" series Jeong Tae-won will revive the honor of the series that gathered 15,000,000 viewers with the new "Marrying the Mafia IV – Family Ordeal". It consists of the story that happens when Kim Soo-mi, Shin Hyun-joon, Tak Jae-hoon, Jung Joon-ha, Hyun Young, Im Hyung-joon and more go on their first overseas vacation.

Cha Tae-hyun from "Speedy Scandal" and "Hello Ghost" is a jockey in the movie "Champ". It has the slight taste of Cha Tae-hyun's human comedy but this time it's a touching drama. A jockey who gave up his dreams after an accident gets together with a horse that was also in an accident. Based on a true story, it is determined to touch the hearts of family audiences.

◆Waited for this day to come!

Several strong players have been looking for the right chance, grinding their teeth. Director Kwak Gyeong-taek knocks on the audiences' doors in a long time with "Paintes". It is based on an original by Kang Full about the love between a man who can't feel and a woman who has hemophilia. kwon Sang-woo and Jung Ryeo-won take the lead.

Director Kim Sang-jin recovers from the failure of "Attack the Gas Station 2" and aims for a twist with "Fighting Spirit". Kim Sun-ah takes on the role of the wife who patiently supported Kim Joo-hyuk, her husband the pitcher. Kim Sang-jin's comedy renewed itself as Kim Joo-hyuk met with Kim Sun-ah.

"This fall, acting VS comedy VS grinding"
by HanCinema is licensed under a Creative Commons Attribution-Share Alike 3.0 Unported License.
Based on a work from this source