"This Is Family" preview: Kim Sang-kyung and Kang Hyeon-joo get married 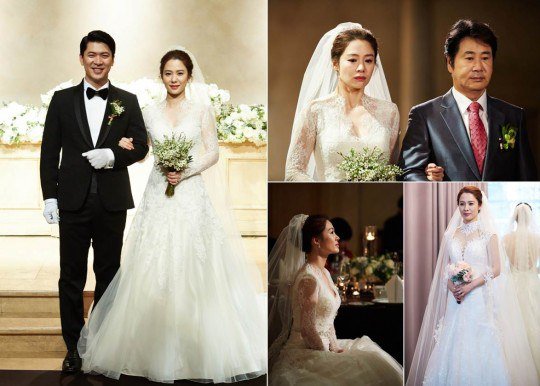 Kim Hyun-joo and Kim Sang-kyung are getting married at last.

The weekend drama "This Is Family" showed a scene where Cha Kang-sim (Kim Hyun-joo) and Moon Tae-soo (Kim Sang-kyung) are getting married.

In another picture, Kim Hyun-joo is going down the aisle with her arm in her father Cha Soon-bong's (Yoo Dong-geun). He is going through a moment of complicated emotions as he feels that his daughter is getting married quickly because of him who is suffering from cancer.

Soon-bong at least achieved his goal of wanting to find a mate for his daughter and Cha Kang-sim, also struggled to make that wish come true. What other things will happen to the Cha siblings from this point on?

""This Is Family" preview: Kim Sang-kyung and Kang Hyeon-joo get married"
by HanCinema is licensed under a Creative Commons Attribution-Share Alike 3.0 Unported License.
Based on a work from this source