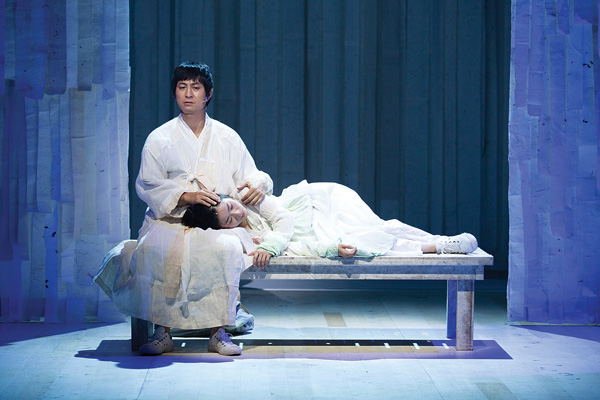 "Seopyeonje" is a story of how traditional Korean folk music became art.

The story is more recognized for the movie than for the original book. The 1993 movie "Seopyeonje" was the box office hit of the year, changing the face of Korean cinema and presenting viewers with a surprising experience.

[Interview : Im Byeong-geun, Musical actor] "When I saw the original movie, it really touched my heart. It seemed to embody the uniquely Korean emotion of "han", or intense resentment caused by injustice".

The moving story of "Seopyeonje" is back this year in the form of a musical.

The story revolves around Song-hwa, Dong-ho, and Yu-bong, three friends who journey together to find the truest Korean musical sounds.

The plot is simple, and yet the combination of Korean pansori and Western musical theater is enough to attract audiences. It is a way to experience Korea's tradition in a more modern way.

[Interview : Seo Bum-suk, Musical actor] "The musical "Seopyeonje" is a Korean work that stands out today among the flood of foreign, licensed musicals. Its expression of Korean emotions will touch your hearts and the performers and audience will feel catharsis together as the "han" in the deepest corners of our hearts is released".

The musical "Seopyeonje"'s greatest offering to audiences is its music.

The performance is filled with the beauty of Korean pansori, intermingled with Korean pop music to create a richer musical experience.

[Interview : Lee Ja-ram, Musical actress] "It's a musical, and because the topic is Seopyeonje, pansori is an inevitable part of the story and the relationship between the characters "Song-hwa", "Yu-bong", and "Dong-ho". You see pansori inserted in all the right places, and our composer created some new pieces where pansori meets rock".

"Seopyeonje" provides the perfect story for creating a musical that will move people's hearts with melodies.

The musical is the result of collaboration between actors who wished to infuse their music with emotion, and the hard work of a renowned composer.

[Interview : Yoon Il-sang, Composer] "Bringing traditional Korean music into a musical is a first. It brings to mind creation and innovation. The power of "Seopyeonje" lies there, not in my music".

"Seopyeonje" brings the emotion of the original work to the theater stage! Come watch Seopyeonje for an experience unlike any other, and feel with your whole heart the story of how Korean emotions came to be expressed through music.

"This week's cultural news 2"
by HanCinema is licensed under a Creative Commons Attribution-Share Alike 3.0 Unported License.
Based on a work from this source