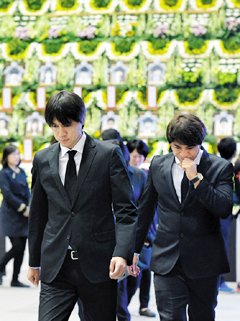 People are flocking to a temporary altar for the victims of last week's ferry disaster set up in Ansan, Gyeonggi province, where most of them came from.

People from all walks of life from children to pensioners from all corners of the country visited the memorial to pay tribute, with the number totaling around 40,000 on Wednesday and Thursday.

The busiest time was during the lunch hour. At one point, over 500 people were waiting patiently in line, and it took an hour until they got their turn to walk up to the memorial.

"Thousands Flock to Memorial Altar for Ferry Victims"
by HanCinema is licensed under a Creative Commons Attribution-Share Alike 3.0 Unported License.
Based on a work from this source