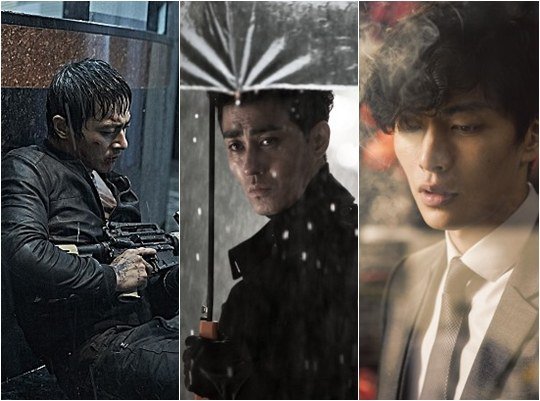 The 3 noir movies that are coming to theaters this June have been unveiled. Two have already been released and the final one, "For The Emperor", is being released on the 12th.

▲ The keyword for "No Tears for the Dead" - quantity

Starring Jang Dong-gun and Kim Min-hee, the keyword for "No Tears for the Dead" is quantity. The gun fighting scenes between Gon (Jang Dong-gun) and his enemies are persistant throughout the movie. If director Lee Joeng-beom displayed short action in his previous flick "The Man From Nowhere", this time he's gone all out with the gun shooting action scenes.

The quantity might not make up for the messy bits of the movie. For 116 minutes, the sound of guns are continuous and there's not one single disappointing action scene, either. Although, it may be a disappointment if people thought about the kind of action seen by Cha Tae-sik from "The Man From Nowhere". It's ironic that Kim Min-hee's emotional scene stands out despite the insurmountable action.

Web-toon "Man on High Heels", which stars Cha Seung-won, has extravagant and elegant action. There are scenes in the movie where high speed and low speed filming have been done alternatively and the umbrella scene on a rainy day has been the most impressive. The way Ji-wook (Cha Seung-won) dominates his opponent without flinching is also very witty.

"Man on High Heels" is all about emotional noir. A wild man named Ji-wook makes a final decision to find his true self but faces the biggest danger of his life. The climax is decorated with action although it can be quite disappointing for those who are expecting noir. There's too much rush in the beginning.

It's cruel. "For The Emperor" coming out on the 12th; it's about the strongest noir out of three and the opening action scene is more like a slaughter than a battle. A person getting stabbed in the stomach with a kitchen knife can all be seen like it is without censorship.

It's the closest film to a traditional noir and it'll be a mystery on how the expression levels will appeal to the audience. It's a weakness when the strong action isn't blending in with the drama, too. There are also two motel action scenes, but the question lies, "was it really necessary?'. And the bed scene between Lee Min-ki and Lee Tae-im is leaning towards unsuitable rather than necessary.

"Three noir movies coming to theaters"
by HanCinema is licensed under a Creative Commons Attribution-Share Alike 3.0 Unported License.
Based on a work from this source