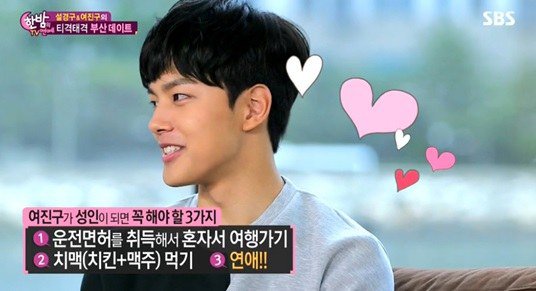 'Night of TV Entertainment' listed three things that Yeo Jin-goo wants to do as he becomes an adult out of his minor age.

The September 9th episode of SBS' entertainment news show, 'Night of TV Entertainment' covered the news including the plagiarism controversy between Yoon Eun-hye and designer Yoon Choon-ho, the news related to the photo of Kang Yong-seok and blogger 'A', interview with AOA's Seolhyun, Joo Won and Kim Tae-hee's behind-the-scenes story of "Yong Pal", interviews with Yeo Jin-goo, Sol Kyung-gu, and Kang Ye-bin.

While Yeo Jin-goo's new movie, "The Long Way Home" co-starring Sol Kyung-gu is to be released soon, his interview drew attention. Yeo Jin-goo listed three things he'd like to do three months later, which is the time when he gets out of his minor age.

Yeo Jin-goo said, "I'd like to travel alone after getting my driver's license" and "The second thing on the list is having chimek (fried chicken and beer). I have been having chicken with coke or cider only so far".

As the last thing on the list, Yeo Jin-goo said, "I want to date someone".