Ticket Sales for 'Snowpiercer' Still Racing Ahead at Bullet-Train Speed 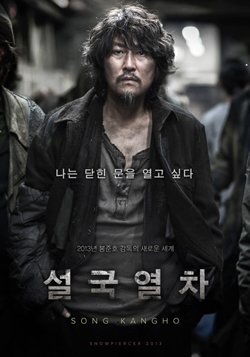 "Snowpiercer" continues to attract large crowds despite competition from new releases at theaters.

The film by Bong Joon-ho attracted 1 million spectators in its first two days, 3 million by day five and broke the 4-million mark on the seventh day of its release -- the fastest clip ever set by a movie in the country. Bong's "The Host" previously set the record in 2006.

His latest movie is still proving hugely popular at the box office, breaking the 5-million attendance mark on its 10th day, hitting 6 million two days later. As of Sunday, 19 days after its release, the film has been seen by over 8 million people.

Such robust ticket sales outpace both "Haeundae", which received more than 10 million admissions in Korea, and "Iron Man 3", the most popular foreign film this year, both of which took 23 days to reach the 8-million mark.

This year's "Miracle in Cell No.7", which quickly established itself as the third-biggest box office hit in the history of Korean cinema, took 25 days to reach the milestone.

"Ticket Sales for 'Snowpiercer' Still Racing Ahead at Bullet-Train Speed"
by HanCinema is licensed under a Creative Commons Attribution-Share Alike 3.0 Unported License.
Based on a work from this source