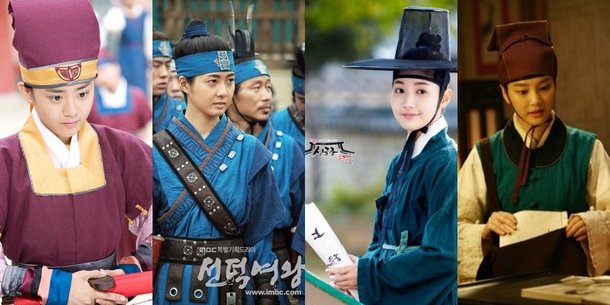 The appearance of a man dressed as a woman in the drama "The Tale of Nokdu" is a hit. Now past woman-as-man and man-as-woman characters since 2008 are being brought back out again.

"Painter of the Wind" starring Park Shin-yang and Moon Geun-young is a fiction drama about Kim Hong-do and Shin Yoon-bok, Joseon artists. The character of Shin Yoon-bok is made-up as a man to find the truth about her father's death. Meanwhile, she shows prominence in drawing, and her teacher, Shin Han-pyeong (Ahn Suk-hwan), helps her become the best artist in Joseon.

2009 series "Queen Seon-deok" is a biography of Queen Seon Deok of Shilla, the first queen of the Korean people.

Lee Yo-won in the role of Deok-man appears dressed up as a man until the middle of the drama. Deok-man was born a twin to the Royal Family, but was abandoned, so she became a palace warrior to survive. She fights bravely to retrieve what is rightfully hers and finally ends up becoming the first queen of Shilla.

The popular web-novel turned into a drama in 2010. "Sungkyunkwan Scandal" is a romance drama about 4 youths in the Sunkyunkwan.

Park Min-young played the role of Yoon-hee, who passes off as a man to join the Sungkyunkwan. Yoon-hee, who reached the limit of her talent due to her low status as a woman and the high social constraints during the Joseon Dynasty, succeeds in looking like a man by the name of Dae-mul and becomes a student of Confucianism at Sungkyunkwan.

"Scholar Who Walks the Night" is a fantasy romance drama about Jo Yang-seon, who pretends to be a man until she meets a new scholar called Kim Seong-yeol (Lee Joon-gi) and finds out he's a vampire.

Lee Yoo-bi's role of Yang-seon is the best book merchant in Hanyang who dreams of becoming a writer by writing a literary novel, but doesn't even know exactly why she has to be dressed like a man. 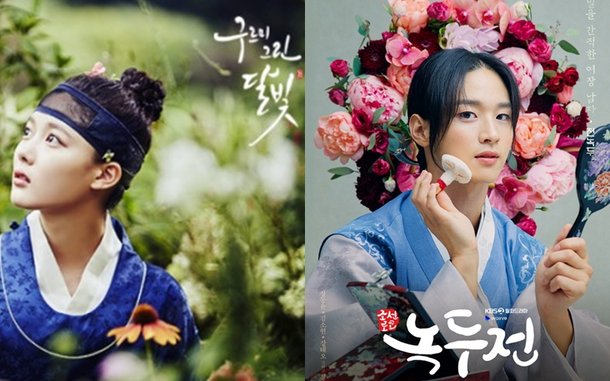 The 2016 drama "Moonlight Drawn by Clouds" starring Park Bo-gum and Kim Yoo-jung is a romantic story about a prince falling in love with a eunuch.

Kim Yoo-jung played the role of Hong Ra-on, Joseon's first romance counselor and Joseon's only woman-as-man eunuch. Ra-on lost her mother when she was young and has been living disguised as a man to hide the fact that she's the daughter of a rebel.

"The Tale of Nokdu" is a Joseon version romantic comedy about Jeon Nok-doo, a man who dresses up as a woman to sneak into a mysterious village of widows, and Dong Dong-joo (Kim So-hyun), a woman who doesn't want to become a gisaeng.

Jang Dong-yoon plays Nok-doo, who finds out that the base of the attackers who attacked his family is the widow village where men are not allowed. So he dresses up as a woman and sneaks in.

"Top 6 Charming Gender-Bending Characters in Dramas"
by HanCinema is licensed under a Creative Commons Attribution-Share Alike 3.0 Unported License.
Based on a work from this source