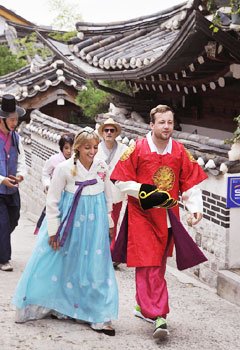 The Corea Image Communication Institute polled 223 foreigners and 307 Koreans in July and August and found that open-air markets and palaces topped the list of must-see attractions.

The aspects of Korean culture that made foreigners most uncomfortable was impatience, followed by binge drinking at social gatherings.

Examples include the tendency of many people here to stick their hands in coffee-dispensing machines even before the hot drink has been poured, and frantically jabbing at the close-door button in elevators.

The most widely used Korean word among foreigners was "I like it", chosen by 48 percent of respondents. But the Korean respondents thought it must surely be "Thank You" with 42 percent.