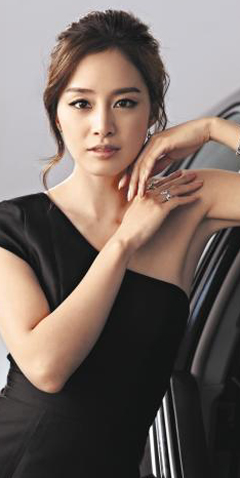 Actress Kim Tae-hee has been picked as the face of Toyota's new Camry, which is set to hit the domestic market in January, the Korean unit of the carmaker has announced.

Having launched print ads featuring the popular TV star on Monday, Toyota hopes Kim can help revive the company's flagging sales as it rolls out the latest version of its flagship sedan following a six-year absence from the market.

Toyota will air TV commercials featuring Kim from next year. As the new Camry is being produced at the factory located in Kentucky, the commercial was filmed in both Korea and the U.S.

In October, the automaker carried ads featuring actor Lee Min-ho to promote the launch of its newly upgraded Camry in the U.S. The first Camry was unveiled almost three decades ago and now ranks as the best-selling car in the North American market.

A spokesperson from Toyota Korea said, "We picked Lee Min-ho because the actor is well-known in the U.S. as well due to the Korean Wave". He added that Kim's Camry ads can be widely used in other Asian countries as she gained popularity across Asia after her appearance in a Japanese drama.

Toyota has targeted sales of 6,000 units a year in Korea, which means it has to more than double the current monthly sales of 200 units to 500 units. Toyota has seen its sales drop 20 percent from a year earlier due to the massive earthquake in Japan in March and large-scale recalls in 2010.