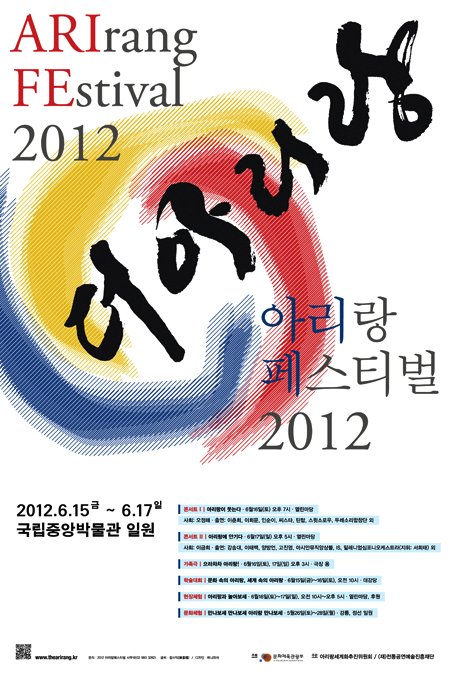 Poster for the 2012 Arirang Festival "The Arirang", which will be held at the National Museum of Korea in Seoul from June 15 to 17.

The 2012 Arirang Festival will be held at the National Museum of Korea in Seoul from June 15 to 17.

The cultural event is designed to raise national and international awareness of the traditional Korean folk song "Arirang", amid public outrage over China's claim to register it as a cultural asset on the UNESCO World Heritage list. The song embodies the sorrow of the Korean people. 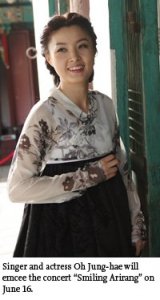 world", said Kwon Oh-sung, chairman of the Arirang Globalization Committee. "This folk song is the symbol of our culture".

Themed "The Arirang", the festival will comprise of concerts and various programs in which participants can experience and learn the value and diversity of the song.

"Smiling Arirang" and "Sharing Arirang" will be highlights of the festival. The former will reinterpret the traditional music in a contemporary way, collaborating with K-pop artists. Singer and actress Oh Jung-hae will emcee the concert. It will also feature veteran singer Insooni and other K-pop stars such as Sweet Sorrow and Sista on June 16. Idol group Sista and TEEN TOP will sing the newly arranged version of "Arirang" and a cappella and tango versions will also be performed.

The latter will introduce original "Arirang" versions with the theme of "family" in a bid to invite the world so that everyone can enjoy them together. It will feature former TV presenter Lee Geum-hui as host and traditional musicians, including triplet-group IS and the Millennium Symphony Orchestra. Participating artists will play different regional arrangements of the folk song – "Jeongseon Arirang" from Gangwon Province, "Jindo Arirang" from South Jeolla Province and "Miryang Arirang" from South Gyeongsang Province. The concert will be on June 17.

The festival will offer 11 programs to elementary and middle school students, giving them opportunities to experience and learn about "Arirang". There will also be a symposium to discuss the origin and spread of "Arirang" with the aim of promoting widespread interest in the Korean folk song.

"Traditional folk song Arirang evolves"
by HanCinema is licensed under a Creative Commons Attribution-Share Alike 3.0 Unported License.
Based on a work from this source