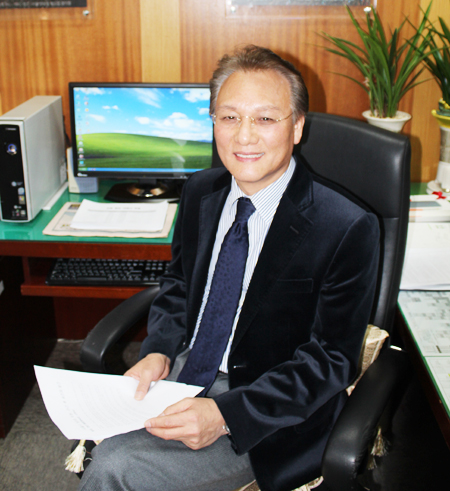 (Above picture: Sung Kyung-hwan, president of Traffic Broadcasting System (tbs), speaks to The Korea Times at the radio station in Seoul on Dec. 27. / Korea Times photo by Noh Hyun-gi)

"I think it's problematic to think that K-pop is all of hallyu". Everyday life of Seoul or the traditional aspects of the culture that tbs aims to feature, can be part of hallyu for curious outsiders.

It is easy to assume that Traffic Broadcasting System (tbs)'s programs only deliver news on traffic congestion and accidents. Surprisingly, traffic news makes up only about 20 percent of the content on tbs' two radio channels (FM and eFM) and its lesser known TV channel according to the newly inaugurated president, Sung Kyung-hwan.

Sung, 56, was named the new president of tbs on Dec. 16. He started his career as an announcer at MBC in 1987 and served in various positions including the director of the MBC Announcer Department and the president of the MBC Academy.

"I heard a radio program on tbs by chance and I was surprised at the questionable quality of the program. A couple years ago, tbs was one the most watched and the main competitor for all the other stations; I wanted to lead it to retain its former glory", Sung said to explain his motivation for applying for the position to The Korea Times on Tuesday.

His strategy is to make tbs a station specifically for Seoulites and serve as an archive of the history of the country's fast changing capital. "Of the many functions of the media such as communication and dissemination of knowledge, one of the most important roles is documenting the daily happenings of the world", Sung said. Sung is convinced that channeling the station's resources to create more Seoul-specific programs will make it competitive among the media giants like SBS, MBC, and KBS.

"We are the only broadcasting company that exclusively archives happenings in Seoul".

Indeed, unlike other broadcasting agencies, tbs is actually a subsidiary of Seoul Metropolitan Government; it is financed by the city's budget and the employees are government workers. Sung believes that this unique characteristic poses both advantages and disadvantages to the company.

Of the two popular radio channels, eFM offers all English programming. "Seoul is a global city now and tbs serves to introduce the life of Seoul to the global citizens living in the city". eFM is also one of a handful of stations in Korea through which listeners can stream BBC news.
In addition, Sung believes that eFM serves as a platform for "hallyu", or the Korean culture wave. "I think it's problematic to think that hallyu is entirely K-pop. A culture changes", he said. For Sung, everyday life of the people living in Seoul or the traditional aspects of the culture that tbs aims to feature, can be part of hallyu for the curious outsiders.

Of the more ambitious plans for tbs, Sung wishes to change its name to avoid the misconception that it only offers traffic news and to mark its new direction to provide Seoul specific programs. Sung believes a new name will generate more creative ideas from employees as well. "Once people stop thinking that it's a traffic news station, they will start churning out more insightful plans for our channels".

This does not mean that tbs will abandon the traffic news all together. "For so long, tbs has been delivering traffic news in a monotone voice like notifying about traffic jams in specific areas. I think we can be creative and communicate more applicable information and even be funny".

Bringing in such changes will take time as it requires a lot of logistic changes through the Seoul government; Sung believes that as the new president, if he holds on to his conviction, the changes will one day take place.

Most importantly, Sung believes in a democratic media. The fact that he got a job at MBC was not an anomaly. He was convicted for participating in student demonstrations during the Chun Doo-hwan administration; he was branded a criminal. This caused him set-backs even after his career started. But fortunately, after the 1980s the media environment improved drastically. "Not just the technology but the media could fully enjoy freedom of expression for about a decade, nowadays I am skeptical again", said Sung.