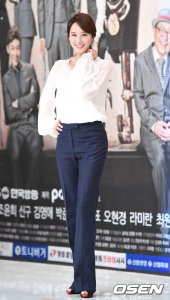 Oh Hyun-kyung finds herself in the spotlight again. The ill-fated actress, who after winning the Miss Korea crown in 1989 made the jump into acting but was tripped up by an old video of her and her boyfriend having sex, is now making headlines with her divorce from her jailed husband. She seemed finally to settle down when she tied the knot in 2002 with Kemongsa president Hong Seung-pyo and gave birth to a daughter in 2003. But in June, she divorced her husband, who is in prison for corruption.

In an interview with the Sports Chosun, a sister publication of the Chosun Ilbo, she seemed confident that the worst is behind her and she is "headed for a more stable life". Oh has had her share of troubles, but she says that the people around her have become her strength. She confides she abandoned all hope that someone would come to her aid and learned to rely on herself, but in the end it was others who helped heal her wounds.

Oh remains sore about the mishap that curtailed her career in her prime, but she is going to lay down plans for a quiet tomorrow, she says. "It's time for a new journey to find myself again". At the end of that road, she hopes, lie happiness and fulfillment.

"Strangely, things have always seemed to get twisted. The incident [of the sex tape] snatched my whole life away from me, and then I had jaw surgery because of terrible pain, and as a woman I felt like my whole life was crumbling before me. But nowadays I don't especially think of myself as a victim. I feel I was unfairly treated, but there are plenty of unfortunate people in this world. It's just that I hope things work out better from now on".

- Your face seems to have brightened. Is there something new in your life?

"For a while, life was almost unbearable, and I just wanted to die, but now things have kind of dulled down. That's why I head out to meet acquaintances and spend more time out of the house. The reason why I restrained myself from ever going out during my married life was because I was worried that [her ex-husband] might feel hurt".

- What kept you going?

"In the end, it was other people. There were times when I felt abandoned by others, but thanks to the unchanging love that my fans have shown me, my feelings have changed. There is a group of 10 people including a lawyer and a professor who love Oh Hyun-kyung for who she is. It was the help of these great people that brought me back to life".

- Do you have a wish for yourself?

"It would really be great if there was no more malicious gossip. I just hope that things work themselves out naturally, and I can once again find Oh Hyun-kyung's place as a woman. I want to become a daughter who can help create good memories for the family that gave me so much positive reinforcement, and I want to be a good mother to my daughter".