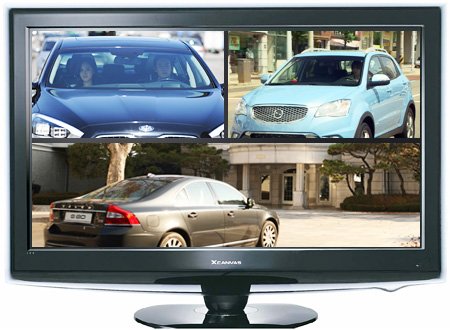 From top left, counter-clockwise, are the K9 from Kia Motors in a scene from television drama "Fashion King", the S80 from Volvo from the film "The Taste of Money" and the Korando C from Ssangyong Motor from "Yuryeong" ("Ghost - Drama"). Automakers are now trying to include their vehicles in television dramas or movies to promote them.

Drivers may now want to watch television dramas instead of checking out the latest car magazines in order to learn what new cars will soon hit the market, because automakers are now pushing forward the use of their vehicles in new TV series.

His female partner, played by Lee Yeon-hee, drives the same automaker's other SUV, the Korando C, while the grandson of a big conglomerate owner has a premium sedan, the New Chairman W, also made by the same company.

The goal of such small-screen appearances of vehicles, according to company officials, is brand awareness and the promotion of products, called "product placement" (PPL)

"The impact of product placement is obviously pretty huge", a Ssangyong official said. "But of course, we consider whether a drama has an interesting plot, its makers are good enough and stars are fit for the image of our products to make sure that they are best presented in the drama".

Compared to traditional advertisements, which explicitly push customers to buy products, those in television series naturally make viewers want to have them, he added.

Just a few examples are Audis in "Iron Man", Lamborghinis in "The Dark Knight" and BMWs in "Mission Impossible".

Luxury imported cars such as BMWs and Mercedes are favorite items as they are well associated with rich chairmen of big companies or young CEOs.

One of the more successful examples includes the BMW Z4 35 that appeared in the sensational hit series "Secret Garden".

"As the series became a mega hit, a lot of people showed interest in our cars and it helped enhance our brand image", a BMW official said.

Volvo Korea sponsored the latest Korean movie",The Taste of Money", a story about ruthless chaebol executives that was invited to the Cannes Film Festival last month.

In the movie, the wealthy family owns Volvo's representative models such as the S80, S60 and XC90. Although the movie failed to garner its director Im Sang-soo an award, it successfully gave Volvo the image of luxury.

Now, local carmakers are also trying to include their products in TV series, which is positively pervasive.

Kia Motors is the most successful local automaker with product placement with its two flagship sedans first introduced through television dramas.

In the television drama "IRIS" in 2007, the automaker introduced its premium sedan, the K7, for the first time along with other exciting models.

The spy action drama was very successful and the Kia's new vehicle received much attention as well, which later led to increased sales of the sedan.

"The effectiveness of the drama in terms of promotion is almost 10 or 20 times bigger than traditional advertisements", a Kia official said. "The biggest benefit is value for money".

Now, companies not only provide drama or movie production firms with their products but also financial support for the production to actively introduce and promote their vehicles.

"It's true that we are now more enthusiastic to take advantage of dramas as a source to promote our products. If viewer ratings hits 10 percent, it means about 1 million households nationwide have a chance to watch our cars", the Kia official said.

Despite the numerous benefits and effectiveness of automotive product placements, however, some market insiders pointed out that the effectiveness has been somehow exaggerated.

"Can presumptions of brand awareness based on the success of a television series translate to actual car sales? It may help, but not many people would buy a car just because it appears in a hit drama", said a market insider, who declined to be named. "And also the cost for automotive product placement has been inflated too much".

Another official from an international car brand pointed out that local brands have the tendency to fill dramas with all their cars, which sometimes hurts the reality of the shows.

"In some dramas, the whole neighborhood seems to have the same cars by the same automaker, which can be seen as ridiculous and is far from reality", she said. "The excessive use of product placement can bring negative results, I think".