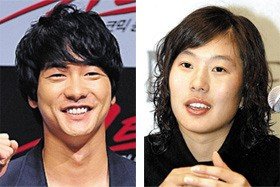 TV personality Marco has been booked for assaulting his wife, the pro golfer Ahn Shi-hyun. Police officers responded to a call from Ahn and caught Marco in the act at his home at 8:20 a.m. on Sunday, according to Seongdong police in Seoul on Monday.

Marco allegedly slapped his wife in the face several times during a quarrel over child raising.

Under questioning at the police station, Marco claimed he simply tapped his wife's face and had no intention of assaulting her. He was let go after about five hours of questioning.

When the news broke, Ahn belatedly called police telling them she did not want to press charges. She later told an interviewer, "I called police because I lost my temper. But it wasn't a serious situation".

A third-generation ethnic Korean from Argentina, Marco debuted in a TV soap in 2007. He met Ahn through an acquaintance in 2009, and they got married in 2011. They had a daughter in May last year.

"TV Personality Booked for Assaulting Pro Golfer Wife"
by HanCinema is licensed under a Creative Commons Attribution-Share Alike 3.0 Unported License.
Based on a work from this source