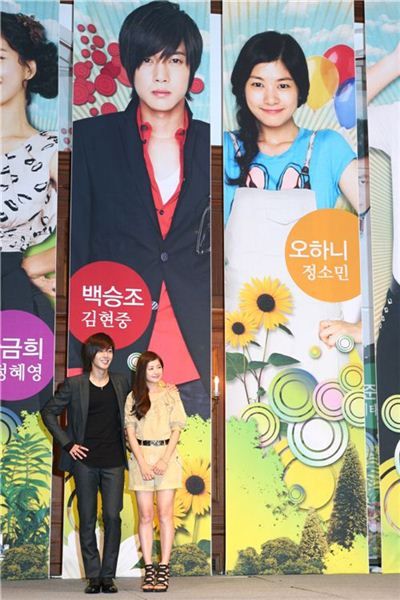 From left, singer and actor Kim Hyun-joong and actress Jung So-min pose during a photocall of a press conference for MBC TV series "Naughty Kiss" held at the Imperial Palace hotel in Seoul, South Korea on August 26, 2010. [Group 8]

"Will fans of Kim Hyun-joong please exit the room to facilitate the interviews?" The host of the press conference for upcoming MBC TV series "Naughty Kiss" had to repeat this line several times during a Q&A session. The show had drawn people's interest due to the popularity of the original Japanese comic series combined with the participation of director Hwang In-roi of hit series "Goong" fame. And it became a 'hot' drama even before going into production after singer and actor Kim Hyun-joong's casting for the show was announced. Will the interest be reflected in its ratings? Below are excerpts from the press conference held at Seoul's Imperial Palace hotel on Thursday.

Q: How do you feel about starring in "Naughty Kiss"?
Jung So-min: I went into "Bad Man" not knowing anything but this time, I'm trying to be careful, taking many things into consideration.
Kim Hyun-joong: I'm working on improving on the aspects I lack in. I'm not trying to be acknowledged for my acting skills -- I just want to make people feel that I've worked hard for the role. I think there have been a lot of dramas which are serious these days and none that are cheerful and sweet so I hope viewers will have fun watching it.

Q: Director Hwang In-roi, you've gone back to doing a love story about a young man and woman like in "Princess Hours". What is the message that you want to deliver?
Hwang In-roi: Upon seeing these bright and cheerful characters, I hope people will feel that they look sweet together and are loveable.

Q: What is your opinion on the original comic series?
Hwang In-roi: When I first read it, I felt that it was cute. (laugh) But the more I looked closely at it to produce the show, the more I started to realize why people enjoy it and I started seeing things that I shouldn't leave out. It wasn't easy to go with the flow of the original series though. We have to show the story of the two going to college but Korea and Japan work under different educational systems so I had a tough time changing it. (laugh)

Q: The video clip revealed a few moments ago showed that the show has a very strong comic-like vibe to it.
Hwang In-roi: It's based on a comic so I tried to bring out the strengths that comics have. And this is about showing the process of how the love between a man and woman come true so I'm trying to express the emotions of young people. I'm focusing particularly hard on the rhythm. And for the parts where Oh Hani imagines things, I'm trying to make those seem more comic book-like. But there's a limit to it as well because you don't have much freedom in terms of frame usage so I'm trying to show it more through characters' expressions.

Q: Why did you cast Kim Hyun-joong and Jung So-min?
Hwang In-roi: It was as if they were the characters that popped out of the comic. And I think they've done well so far in trying to express what I want. There are some things they lack at because they're still newcomers but I think that actually suits the show better. I'm trying to do a good job of delivering what they're trying to express rather than demand for certain points.

Q: Kim Hyun-joong, you play the role of Baek Seung-jo who is a genius and good at everything. Don't you feel any pressure in having to play such a role?
Kim Hyun-joong: He's someone who is good not only at his studies but at sports too so I have to learn the proper posture even for when he's running in a race. And since I'm supposed to be a genius, I have to be at ease when teaching Jung So-min her studies. So it's very hard. (laugh) I've also been trying to pronounce my words outwardly when saying my lines because I think I mumbled when I did "Boys over Flowers".

Q: Jung So-min, you took on "Naughty Kiss" right after "Bad Man". Was this difficult?
Jung So-min: I had a hard time because of that. The shoots overlapped a bit and my two characters were so different that I was having a hard time psychologically because I was worried I might not do well. I think I have been improving now that one is over.

10: Is your character Oh Hani like you in any ways?
Jung So-min: My character Monet from "Bad Man" was similar to me in a way and I think the same thing about this character as well. It's as if I maximize on the aspects that exist within me to a certain extent.