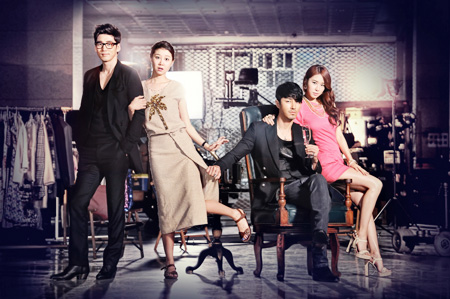 From left, Yoon Kye-sang, Gong Hyo-jin, Cha Seung-won and Yoo In-na will appear in the TV drama "The Greatest Love". The series premieres Wednesday on MBC. / Courtesy of MBC

A drama featuring the life of entertainers when they are not in front of the camera begins today, starring top actors and actresses such as Cha Seung-won, Gong Hyo-jin, Yoon Kye-sang and Yoo In-na.

"The Greatest Love" revolves around Dokgo Jin (Cha) and Gu Ae-jeong (Kong). Gu was the most popular member of girl group Gukbo Sonyeo, literally meaning "National Treasure Girl", some 10 years ago, but fell from grace after becoming embroiled in scandals.

She makes appearances on television programs to eke out a living for her troublemaker father and brother.

On the other hand Dokgo is the most beloved star in the nation, topping all kinds of popularity polls and appearing in many commercials, but has several character flaws. Gu discovers a secret about Dokgo by chance and reveals it on a talk show, incurring his fury. However, their ill-fated relationship unfolds in an unexpected way as Dokgo falls for Gu and tries to win her heart.

Yoo plays the role of another star Se-ri, who was in the same group with Gu 10 years ago, while Yoon portrays Pil-ju, a gentle, handsome Oriental medical doctor who meets Gu on a dating game show.

The drama draws from gossip people hear about entertainers.

"For instance, there are rumors such as Gu being the mistress of a gang member or having a secret son, who actually is her nephew, in the drama. These episodes come from rumors, but do not allude to anyone in particular. There are no role models for the characters", Kong said at a press conference for the drama last week.

Kong said her character is wounded, who cannot love someone because of scandals.

"When Dokgo confesses his love to her, she rather steps back wondering why he likes her. She was also worried that her 'unfavorable' image might harm her love interest", she explained.

Cha said he wants to show a bright, healthy side of the entertainment scene in Korea through this drama.

"I had an interview with high school students for their school paper and the thought struck me. They adore and admire actors and singers just because they like the entertainers - there is no specific reason", he said. "I thought we should be more responsible for such popularity and show them the entertainment scene is not such the harsh, dark place described in recent news".

He admitted that entertainers do hide behind their image due to their job. "However, this drama will show they are just genuine people off-camera", Cha said.

Yoo shot to stardom after landing principal roles in MBC's sitcom "High Kick Through The Roof" (2009) and SBS drama "Secret Garden" (2010) within a year of making her debut.

"I am still a rookie and totally different from the arrogant Se-ri. But it is somewhat gratifying to play such a character", Yoo said. "I will try to remember how I felt when I first began even if I become a big star someday".

Yoon is the only singer-turned-actor in the drama, but he plays the role of an Oriental doctor, not an entertainer.

"The script is very realistic, giving a fun sneak peek into what is going on behind the scenes", he said.

"However, the situation is totally different from when I was a singer - we were not even allowed to go out of our waiting room to meet other singers".

Park Hong-gyoon, the director of "Queen Seon-deok", takes command of the drama and Hong Jeong-eun and Hong Mi-ran, aka the "Hong Sisters", wrote the script. The sisters are known for their witty lines in dramas such as "Fantastic Couple" (2006) and "You're Beautiful" (2009). Their most recent hit was the 2010 drama "My Girlfriend is a Gumiho", starring Lee Seung-gi and Shin Min-ah.

"They are very good at character comedy and we will differentiate from other romantic comedies on the small screen in May through brilliant episodes", the director, Park, said.

"The Greatest Love" will air on Wednesday and Thursday at 9:55 p.m. on MBC.

"TV soap to peek into celebrity life"
by HanCinema is licensed under a Creative Commons Attribution-Share Alike 3.0 Unported License.
Based on a work from this source