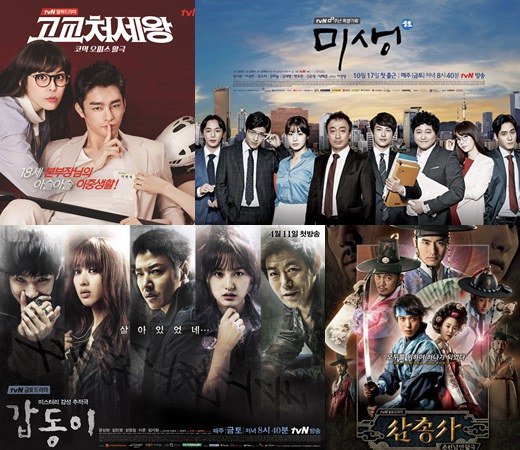 "Rude Miss Young-Ae Season 13" has gone by and it's been with tvN for 8 years in a row now. There has been a wide genre of dramas on tvN so far.

The first tvN drama of 2014 was "Emergency Couple" starring Song Ji-hyo, Choi Jin-hyuk, Choi Yeo-jin and Clara. It wasn't all about romance but it went by with the set-up that a divorced couple reunited in the intense atmosphere of a hospital.

Instead of continuing with another romantic comedy, tvN went onto "Gabdong - The Serial Killer" which is based on the Hwaseong murders starring Yoon Sang-hyun, Kim Min-jung, Sung Dong-il, Lee Joon, Jung In-gi, Kang Nam-gil, Jang Gwang and others. Lee Joon grew with this drama as he played Ryu Tae-oh, the psychopath.

Then came along dramas like "A Witch's Love", "The King of High School Manners", "Marriage Over Love" and more. "A Witch's Love" is about the romance between a single 40-year-old Ban Ji-yeon (Uhm Jung-hwa) and a younger man in his 20s, Yoon Dong-ha (Park Seo-joon).

"The King of High School Manners" starred Seo In-guk who played two characters at once. He played the role of a teen head of headquarters and worked well with Lee Ha-na.

"Grandpas Over Flowers Investigation Team" came along next starring Lee Soon-jae, Byun Hee-bong, Jang Gwang, Kim Heechul and Lee Cho-hee. Detectives in their 20s suddenly turn into old men and drew attention with the uniqueness but it failed to drag the attention further.

"Golden Tower" and "The Idle Mermaid" were based on farms but they both ended earlier than planned.

tvN then came out with "The Three Musketeers - Drama" in early August starring Jung Yong-hwa as Park Dal-hyang, Lee Jin-wook as Prince So-hyeon and Jung Hae-in as Ahn Min-seo. However, it was broadcasted only once a week and the vague concept of romance and action disappointed many. Although, there is currently talk about season 2.

tvN wasn't too active from July to September. However, "Plus Nine Boys" about the romance of four men, "My Secret Hotel" starring Yoo In-na and Jin Yi-han and "Liar Game" were released to reset the mood. "Liar Game" is an original by Kaitani Sinobu and thrilled the fans with news of Lee Sang-yoon. Lee Sang-yoon, Kim So-eun and Shin Sung-rok showed potential in the drama and there is talk about another season 2 as well.

Other daily dramas like "Family Secrets" and "Sensible Love" have been constantly gaining support from its viewers. Coming up next is "Heart to Heart", an original web-toon drama produeced by Lee Yoon-jeong and Pyo Min-soo. 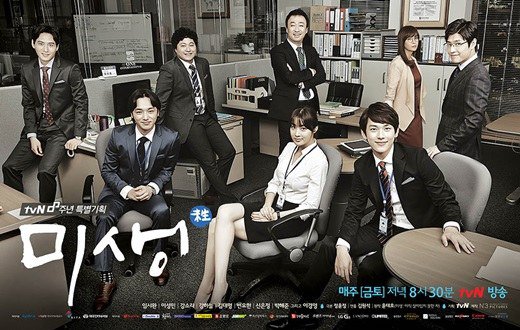 "tvN drama, various attempts until "Incomplete Life""
by HanCinema is licensed under a Creative Commons Attribution-Share Alike 3.0 Unported License.
Based on a work from this source