tvN dramas after "Cheese in the Trap", stationary or leap? 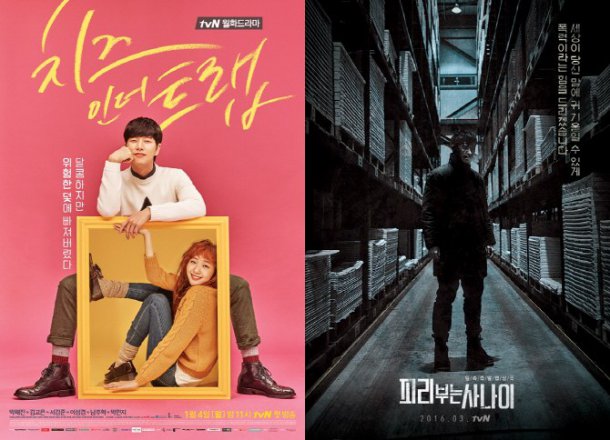 Will tvN be in a slump again? "Cheese in the Trap" that ended on the 1st of March seemed like a flare. It started off well but became problematic towards the middle of the drama. The hostility towards the drama led to a drop in percentage and it fell to as low as 6%. "Pied Piper" which is coming up next is going to have an important role on tvN.

- Intense Monday and Tuesday drama VS Friday and Saturday.

tvN organized a 8:30PM time frame with "Answer Me 1994" in 2013. The time frame became official with "Gabdong - The Serial Killer", "Incomplete Life" and others. The entertainment TV shows like "Three Meals A Day" and the "Flower" series played part in the success too. The current Friday-Saturday drama "Signal" is currently chasing two hares at once.

Unlike the Friday and Saturday time frame, the Monday and Tuesday time frame hasn't been able to overcome the wall of 2%. "Nine: Time Travelling Nine Times", "I Need Romance Season 3", "The King of High School Manners", "Liar Game" and such were popular but not popular enough. It's because they are all broadcast late at 11PM and has to compete with other entertainment shows in the ground-wave channels.

- Issue+viewing percentage "Cheese in the Trap"

"Cheese in the Trap" was a very anticipated drama as it is based on a popular web-toon and the drama stars Hallyu star Park Hae-jin. The drama was directed by Lee Yoon-jeong who is responsible for "Coffee Prince". The cast looked great and the drama looked well and ready for take-off. The drama set a record of 5% in just three episodes. Park Hae-jin, Nam Joo-hyuk and Seo Kang-joon even came up with surprise events related to the viewing percentage.

Then the problem started when the viewers claimed the drama was not in line with the original web-toon. The web-toon writer Soon Kki said, "The production crew had no discussion with me about this whatsoever". Then the production crew let out an official statement saying, "We have apologized to the writer". Then thing led to an internal dispute which got out to the public very soon. The drama didn't show during the Lunar New Year break and the viewing percentage wasn't so generous anymore. The ninth episode is a record breaker with 7.2%.

The new drama "Pied Piper" is about a negotiations team that deals with problems by communicating with the crisis. It's a new subject that's never been dealt with in Korean drama before starring Shin Ha-kyun, Yu Jun-sang and Jo Yoon-hee. Director Kim Hong-seon-I and writer Ryoo Yong-jae are coming together once again. However, it's not getting as much publicity as "Cheese in the Trap" so it might end as a drama for hardcore fans.

"tvN dramas after "Cheese in the Trap", stationary or leap?"
by HanCinema is licensed under a Creative Commons Attribution-Share Alike 3.0 Unported License.
Based on a work from this source