TVXQ to make comeback as duo in January 2011 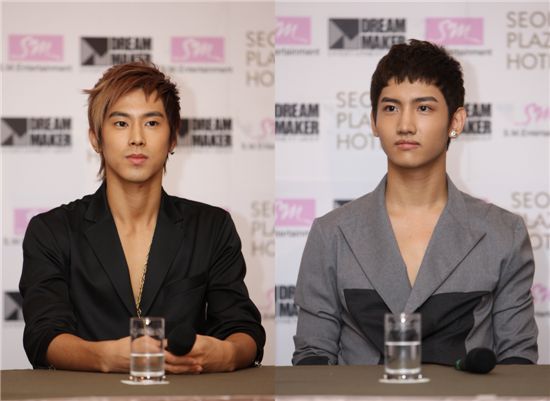 Boy band TVXQ, who have halted their activities as a five-member boy band since last July when three of its members filed a lawsuit against agency SM Entertainment, will make a comeback next January as a duo formed of its two remaining members Yunho Yunho and Changmin Lee Changmin.

The announcement came through a message on their official website (tvxq.smtown.com) on Tuesday, stating that Yunho Yunho and Changmin Lee Changmin will release an album next January without members Jaejung (Kim Jae-joong), Park Yoo-chun and Junsu.

"For over a year now, both Yunho Yunho and Changmin Lee Changmin have refrained from pursuing their singing activities...... The court ruled that all of TVXQ's activities must be carried out through SM Entertainment but the three members have been non-responsive to our offers", SM said of the reason to making the decision.

After Jaejung (Kim Jae-joong), Park Yoo-chun and Junsu brought suit against SM, demanding that their 13-year exclusive contract with the agency be nullified, the court had ruled in partial favor of the three, stating that SM cannot interfere with their individual activities but also that they can only act as members of TVXQ through SM.

SM then asked the boys to return to the group but the trio did not respond to the agency and SM then took legal action against them. The two parties have been in conflict ever since.

Meanwhile, SM's message today went onto explain that TVXQ will resume its activities "for Yunho Yunho and Changmin Lee Changmin, who have not given up on their dreams for TVXQ, for the band itself which must be sustained after what it has been through to become what it is today...... and for the fans who have supported the group with their love and trust".

"We SM are the ones who have seen TVXQ come about and grow and we will continue to see it through. We will also do everything in our power to support the group in their future endeavors", SM said through the message.

Yunho Yunho and Changmin Lee Changmin made their debut in 2004 as part of TVXQ, inarguably the most successful boy band in Korea and throughout Asia with reportedly the largest fan base in the world.

The group enjoyed great success in the Japanese music industry in particular, becoming the first foreign artists to top the Oricon singles charts six times and they placed their single and album simultaneously within the top three slots of Oricon's singles and albums chart, the first time for a foreign artist to do so in 15 years.

Since being embroiled in the dispute, Jaejoong, Park Yoo-chun and Junsu have formed a Korean boy band named JYJ and have released a worldwide album titled "The Beginning" for which they finished their global showcase tour last week.

Yunho Yunho has led a successful career outside of his group activities, branching out into acting with his role in MBC's "No Limit", being cast as one of the male leads for the musical adaptation of "Goong" and making his return to the small screen in an upcoming action series.

He has also joined fellow member Changmin Lee Changmin and the rest of SM Entertainment artists for the "SMTOWN LIVE'10 WORLD TOUR" in late August.

"TVXQ to make comeback as duo in January 2011 "
by HanCinema is licensed under a Creative Commons Attribution-Share Alike 3.0 Unported License.
Based on a work from this source