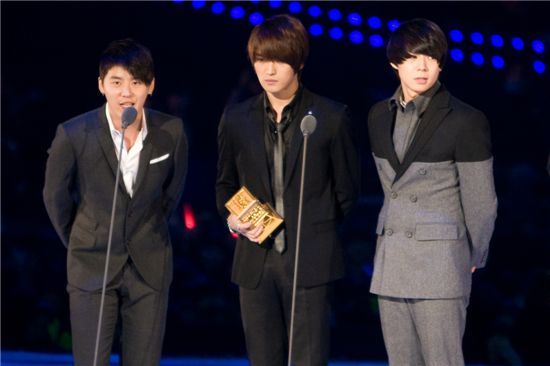 The newly-formed trio from TVXQ, consisting of members Kim Jae-joong, Park Yoo-chun and Xiah Junsu, is gearing up for a splashing debut with a new album which will be produced by prominent U.S. musicians Kanye West and Timbaland.

1990s boy band SOLID member Jae-yoon, now working as a record producer in Taiwan, said in an online posting that he has been writing songs for "DBSK, or better known as TVXQ in Japan" whom he described as "the best selling group in Asia basically crushing everyone's sales".

Jung had posted a message earlier this month, mentioning a "top secret" project and joking "what better place to talk about top secret projects than a public blog like this one? haha."..

He then announced over the weekend that he was involved in "a huge collaboration project featuring the 3 guys from DBSK and the biggest A listers in the U.S.. being Kanye West and Timbaland", adding "we're working on the album as I type".

Jung went onto say that he will be flying to Hawaii "to record at Kanye's house" and then "possibly go to LA or Miami to record with Timbaland".

The singer and songwriter seemed ecstatic about the collaboration, exclaiming "This is by far THE biggest budget project EVER in Asia... PERIOD!"

Last July, the three TVXQ singers had asked a court to nullify their 13-year exclusive contract with SM, claiming that the contract period is too long.

The legal dispute led to the mega-successful boy band halting their activities as a five-member group, who officially quit working as a group in Korea last year and later in Japan as well.

Arguably the most phenomenal K-pop act created by talent agency SM Entertainment, the TVXQ had enjoyed great success throughout Asia and the Japanese music industry in particular.

Although the group's legal woes did little to wane their popularity among fans, the five members have been going their separated ways with Kim Jae-joong, Micky and Xiah forming a new group through which they will continue their music careers and the other two venturing into acting.

Kanye West is a hip-hop superstar whose four albums sold over ten million copies worldwide and collected a total of 13 Grammy awards to date. He will be visiting Korea this summer to give his first concert in the country, headlining SK Telecom's "Summer Week&T 2010" music festival.

"TVXQ trio to record album with Kanye West, Timbaland"
by HanCinema is licensed under a Creative Commons Attribution-Share Alike 3.0 Unported License.
Based on a work from this source