TVXQ Yunho starts rehearsing for "This Is It" show 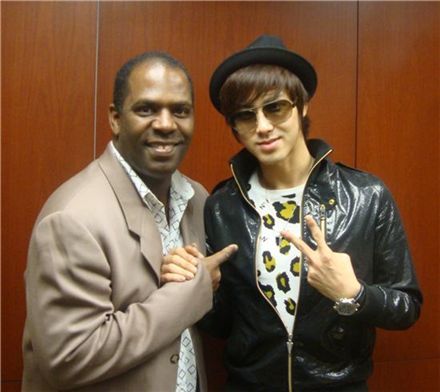 Korean idol group TVXQ leader Yunho is in the United States to rehearse for a commemorative concert for the late King of Pop Michael Jackson, according to agency SM Entertainment on Tuesday.

SM explained in a press release that the singer arrived at Sin City in Las Vegas last Friday to start rehearsing for the Korean leg of the "2010 This Is It World Tour" for which he had been asked to take part in late last month.

Upon his arrival, the idol group member met with Morris Pleasure, on the keyboard in the "This Is It Band" and in charge of the Seoul show, to discuss in detail about Yunho's performance for the show.

The Korean singer also started rehearsing with the local choreography team to perform hits by the late King of Pop including "Beat It", "Thriller", "Smooth Criminal" and "Jam".

The upcoming show, to be held March 27 and 28 at Yongsan War Memorial Peace Plaza, will also feature a premiere performance of Jackson's final single "This Is It" from the documentary film of the same title released last year.

The concert, titled "Band from MICHAEL JACKSON's THIS IS IT the Movie with Yunho", will be hosted by Korea's major broadcaster SBS and produced by S2 Entertainment and Paragon Music Corporation.

Yunho, whose real name is Jung Yunho, made his debut in 2004 in the five-member boy band which is now one of the most successful K-pop acts in Asia. They reportedly have the largest fanbase in the world and have enjoyed great success in the Japanese music industry in particular.

He also tried his hand at acting last year, playing a soccer player in MBC TV series "No Limit".

"TVXQ Yunho starts rehearsing for "This Is It" show"
by HanCinema is licensed under a Creative Commons Attribution-Share Alike 3.0 Unported License.
Based on a work from this source