Two Korean Films to Vie at Cannes Festival in May 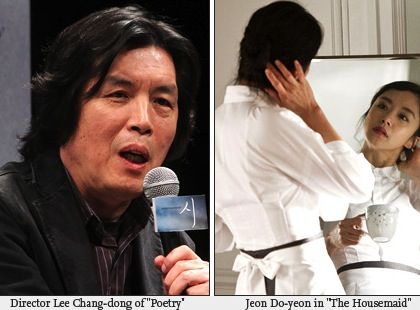 Two South Korean films will contend for the Palme d'Or at the Cannes Film Festival, organizers announced Thursday as they announced the festival's lineup. The 63rd edition of the event will run from May 12 to 23 in the French southern coastal resort.

In 2007, the entire country celebrated the crowning of Jeon Do-yeon as "the Queen of Cannes", when she won the Best Actress award for her performance in Lee Chang-dong's riveting drama "Secret Sunshine".

Now the former partners, Lee and Jeon, will return to the festival as rivals.

Lee will vie for the top prize with "Poetry" against his former leading lady, who stars as the heroine of Im Sang-soo's "The Housemaid - 2010", in the main competition section.

The former culture minister is no newcomer to the event; "Secret Sunshine" was in the competition pool when Jeon won the Best Actress award, and the director returned to the event last year to serve on the judging panel.

"Poetry", his sixth feature film, marks the return of screen veteran Yoon Jung-hee. It is about a grandmother who belatedly discovers the beauty of poetry, but is forced to embrace the darker side of life when an unforeseen tragedy hits. The festival director Thierry Fremaux sent an email to Lee lauding "Poetry" as a piece with sophisticated simplicity, humanity and form, and a universal artwork that embodies poetry itself.

Meanwhile, Jeon has been drawing attention after the preview for "The Housemaid - 2010" was released. The film, co-starring heartthrob Lee Jung-jae, is a remake of the 1960 film "The Housemaid - 1960" of the same name by Kim Ki-young. The original film was digitally restored under the auspices of Martin Scorsese to feature in the 2008 edition of Cannes.

In the film, Jeon stars as an uncanny housemaid who is seduced by her boss, and things take a dark twist when the mistress of the house discovers the affair.

Lim, who is directing the film, is also a veteran of the international film festival circuit. His previous work "Tear" featured in Berlin while "A Good Lawyer's Wife" competed at Venice and "The President's Last Bang" was invited to Cannes.

"I was speechless the moment I heard the news", Jeon was quoted as saying by the film's domestic publicist. "I am thrilled and honored, regardless of what the result will be. I am thankful to the director, cast and crew for making such a good piece, and I would like to share my joy with them. I am really happy".

The face-off between Lee and Jeon is expected to take place in the local box office as well, as "Poetry" and "The Housemaid - 2010" are both due in theaters on May 13.