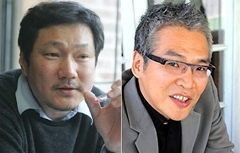 Hong Sang-soo's "In Another Country" and Im Sang-soo's "The Taste of Money" have been invited to the 65th Cannes Film Festival next month. This marks the fourth time that two Korean films have been selected for the official competition of arguably the world's most prestigious film festival in the same year.

Hong has set a new Korean record for having his works featured at Cannes eight times, starting with "The Power of Kangwon Province", which appeared in the event's Un Certain Regard category in 1998. "Virgin Stripped Bare by Her Bachelors", "Tale of Cinema" and "The Day He Arrives" were also among those to be screened at the festival.

As for Im, this will be the second time his film has featured in the official competition after "The Housemaid - 2010".

"In Another Country" stars French actress Isabelle Huppert, a two-time winner of the Best Actress Award at Cannes.

Other films selected for the official competition include David Cronenberg's "Cosmopolis", Walter Salles' "On the Road", Michael Haneke's "Amour", and Abbas Kiarostami's "Like Someone In Love".

The festival will open with Wes Anderson's new film "Moonrise Kingdom" on May 16 and close with Claude Miller's "Thérèse Desqueyroux" on May 27.