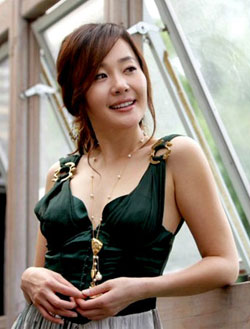 Actress Uhm Ji-won is set to appear in an upcoming episode of BBC World's "The Third Eye", a documentary series that spotlights up-and-coming countries. It has already covered Britain, Spain, Kenya and Vietnam, with Korea appearing in an episode that started airing on June 11 around the world. It is scheduled to be shown in about 200 countries.

The next installment of the eight-part segment on Korea focuses on the country's cutting-edge technology and world-leading level of Internet penetration, interspersed with interviews with Eom giving her opinions on Korean culture, domestic movies and the Korean Wave. It also features footage from her latest movie "Foxy Festival".

"I think culture is a really powerful product. When Korean culture attracts the love of foreigners, Korea's national brand rises in value", said Eom, who herself rose to prominence in 2004 with the release of "The Scarlet Letter" in a role that garnered her a nomination for Best Supporting Actress at the 25th Blue Dragon Film Awards.

Eom, who was interviewed in Korea, was chosen in light of her impressive acting skills, natural charm and English fluency, producers said.

"Uhm Ji-won Takes Center Stage for BBC's 'Third Eye' Documentary"
by HanCinema is licensed under a Creative Commons Attribution-Share Alike 3.0 Unported License.
Based on a work from this source