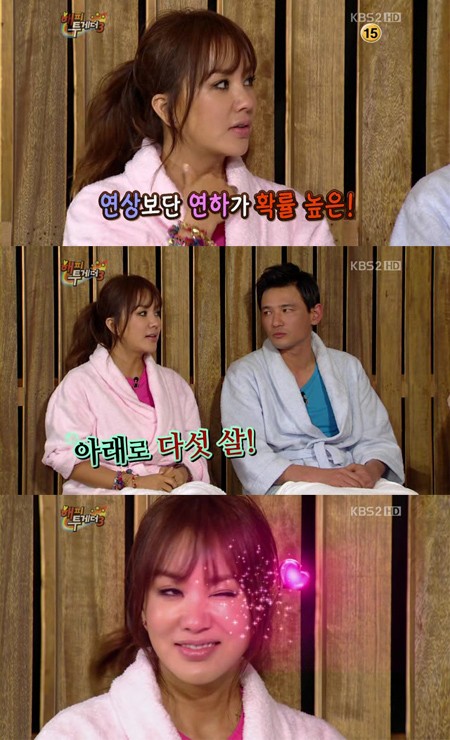 Singer and actress Uhm Jung-hwa (43) is waiting for a younger boyfriend.

KBS 2's "Happy Together", aired on January 19th, invited Uhm Jung-hwa and Hwang Jung-min on the show. She said, "My last relationship was two years ago" and expressed a desrire for a new love.

She raised 'Oh!' from the audience at the statement, "I prefer younger males than older ones", and explained, "Most men older than me are already married. Therefore I will have a better chance with younger men".

When the MCs asked her, "How young can he be?" she said, "ten years is a bit too much so I think five years should be good enough". Comedians Jeong Beom-gyoon and Heo Kyung-hwan showed interest and Heo said, "It's only polite to speak closely to an older woman when you've seen her twice" and called her by her formal name, making her blush.

Uhm Jung-hwa explained that she was very happy her brother Uhm Tae-woong was doing so well and that Shin Bong-sun would be alright as a sister-in-law, but not Lee Young-ja.

"Uhm Jung-hwa prefers a younger boyfriend"
by HanCinema is licensed under a Creative Commons Attribution-Share Alike 3.0 Unported License.
Based on a work from this source