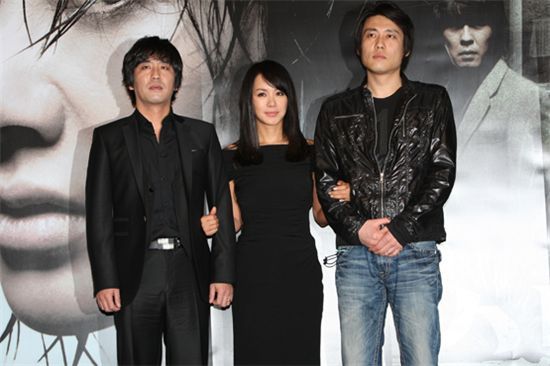 The film is scary, sad yet cruel. Many emotions were felt in the film "Bestseller" which was revealed at a press screening held March 30. And it was because the many incidents surrounding and swallowing up bestselling writer Baek Hee-soo (played by Uhm Jung-hwa) stretched into various genres such as thriller, mystery and action. Baek Hee-soo, who is being suspected of plagiarism, overcomes a slump and publishes a new book. But it too winds up in a plagiarism controversy and a strange vibe hangs in the air of the country house where she wrote the book. Despite being a horror movie, the film hangs on to elements of mystery and at the same time, does not give up on being a drama either, just like the director said he "wanted to pour various genres such as a house horror, mystery and thriller into a single film and make it flow like water". The film also unravels its story without attempting to squeeze in a shocking twist -- a mistake commonly made in Korean thriller and horror films. Actress Uhm Jung-hwa, who maintains her realistic touch while going back and forth between schizophrenia and hysteria, does well in pulling off her part as the film's sole lead. And the balanced and seasoned acting by every main and supporting actor is impressive as well. Below are excerpts from the Q&A session held after the screening.

Q: A variety of stories such as plagiarism, murder and mystery appear in "Bestseller". What part did you focus on the most when you were making the film?
Director Lee Jeong-ho (Lee): The film is about a writer who searches for the truth after she goes through things that she cannot believe herself. In the second half of the film, when the memories or forgotten memories of each character are revealed, I tried to make those circumstances feel like something that could happen in real life.

Q: You got a positive review when you lead the story in your previous film "Aurora Princess" and you again are the center of "Bestseller". I think this could have motivated you to think differently about acting but also pressured you. 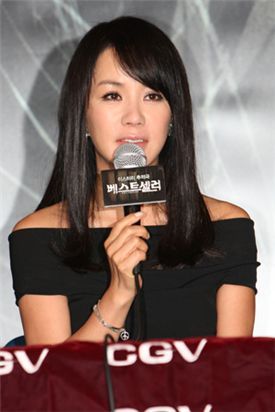 Uhm Jung-hwa (Uhm): I am a little worried now that the movie is going to open. (laugh) But I am going to have faith in the movie and not be scared because I believe the film's story is something that viewers will enjoy relating to. I am so happy that I was able to take part in this kind of movie, and I wanted to work hard on it. My character Soon-jung in "Aurora Princess" was a mother who lost her daughter, so there was a sadness underneath all her emotions. But Hee-soo in "Bestseller" is a woman whose own desire, the desire to write, is bigger than anything else. In fact, I could actually compare the character to myself, thinking about how I would feel if I couldn't work or experienced something that is mentally difficult, like being accused of plagiarism. So in this film, I was actually able to enjoy myself even while I was working was hard.

Q: Many set-ups in the movie remind me of horror movies like "1024" or "Silent Hill". Plagiarism appears as an important motif in the film but I don't think the film itself could be entirely free from that accusation either.
Lee: I actually expected to be asked this question when I was first planning the film. I worried about this a lot while writing the scenario but I think there just have to be so-called cliches in the film. I haven't seen the film "1024" or what the village looks like in "Silent Hill" but if you say I might have plagiarized those little details, I would have to disagree. There is a basic rule and movement flow in genre like thrillers, horror and mystery movies. I used a lot of those so-called cliches in this movie. There is a dialogue in the movie about plagiarism, and I believe plagiarism is something that stands at the borderline of whether one's previous memories can come out as one's own idea through his unconsciousness without one realizing that he is doing something consciously or unconsciously. Theoretically, it can be categorized as two different things but I think it is impossible to distinguish the two in reality. It seems irresponsible but only the person himself would know and I think it is up to his conscience.

Q: It must have been exhausting for the actors both psychologically and physically to act out incidents and stories that happen in a remote countryside village. 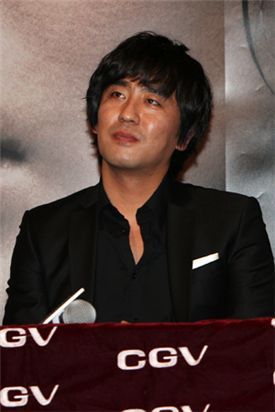 Lee: All the scenes were difficult and draining. As you can see, there are various genres placed in the fim. I worked the hardest on making all the different genres flow, like water, into one movie. Personally, my favorite scene is when -- about halfway into the film -- Baek Hee-soo realizes the real reason that she has not been able to write for two years. The energy that actress Uhm Jung-hwa had when we shot that scene -- it was so impressive that I almost cried. The action scenes in the second half of the movie was physically exhausting. I put in great effort to shoot the process starting from how each trauma of several characters in the basement explodes under the supernatural energy inside the house and how it builds into a total chaos. That was probably the most exhausting scene for the actors.
Uhm: The underwater scenes were very difficult too. It was hard to hold my breath for a long time and I was so terrified when I first went into the water. But I am disappointed because they came out dark in the film. (laugh) The fight scenes were physically exhausting too. For the scenes inside the country house, it was hard every time I had to feel fear of the vibe of the house and express the feeling of being with my daughter.
Ryu Seung-ryong (Ryoo): This is just a tip of the iceberg compared to Uhm Jung-hwa but shooting the underwater scene was difficult because I has claustrophobia. Compared to me, Uhm Jung-hwa is a mermaid. (laugh) It was also hard to watch Bae Hee-soo sobbing when she is talking to her psychiatrist. It was heartbreaking to see her dried-up cry, such a sad cry that she couldn't even shed tears.

Q: The role of actresses is getting smaller and smaller in Korean films nowadays. Weren't you worried when you chose a sole female lead for Uhm Jung-hwa? 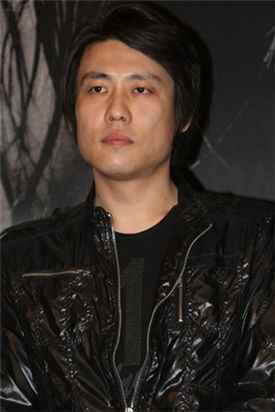 Lee: Even this year, so many films with male leads are opening one after another. But "Bestseller" had a female lead right from the start. I chose to have a female writer because the anxious emotions and mother instincts of women play a big part in the story rather than emotions felt by men. And from the film "Princess Aurora", I realized that Uhm Jung-hwa has a whole different side to her as an actress, beyond the female lead image in romantic comedy movie she had. When I was planning the movie, I thought she and I could find yet another different side to her if we worked together. There are limitations that actresses have in every genre, but Uhm Jung-hwa is one of the few actresses who can break down the boundaries of genre.

Q: You have an unusually many fight scenes with men in the movie. Who was the most difficult to fight with?
Uhm: Actually it was Ryu Seung-ryong, who played my husband. (laugh) In the scene where he is rescuing Hee-soo after she drowns, it really hurt when he was doing CPR on me. And I got slapped and my nose even started to bleed. But when I was shooting this film, I felt for the first time how reassuring it was to have a co-star like him. I even thought it would be great to have a husband like him. (laugh)

Q: The ending credits say that actress Choi Kang-hee lent her voice in the film.
Lee: Choi Kang-hee was personally close with the film's producer and I was interested in her ever since the script for "Bestseller" first came out. She offered to help if there was anything she could do during post-production and gladly accepted to lend her voice in the film. She provided voice-overs for the whispering voices inside the house surrounding Baek Hee-soo. We put in a lot of special effects so it won't be easy for viewers to understand, but we just tried it anyway.

Q: Recently, many Korean films opened in theaters claiming to be thrillers. If you could say one thing to the viewers who will watch "Bestseller"?
Lee: There have been many thriller films but we wanted to differentiate our movie. We focused on making various genres in this film penetrate through the character Baek Hee-soo on a wholistic level of the film. It breaks away a little from existing traditional thrillers, and I think it is a film where you can eat various ingredients so I hope the audience has fun watching it.
Ryoo: I think our movie is going to be a bit of a fresh shock. I am confident that the film will reap a lot of rewards in many aspects. There aren't many Korean movies opening in April and I hope it does really well.

"Uhm Jung-hwa says "want a husband like Ryu Seung-ryong""
by HanCinema is licensed under a Creative Commons Attribution-Share Alike 3.0 Unported License.
Based on a work from this source