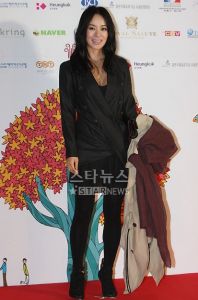 Singer and actress Uhm Jung-hwa takes on the role of the antagonist in director Park Hee-gon's new movie with the working title "Insadong Scandal".

According to the Ssamzie I-Vision production company, Uhm will play "Bae Tae-jin", a cold-hearted mogul of the fine arts industry who stops at nothing to accumulate wealth.

Filming for "Insadong Scandal" is set to begin next month. The story is about the restoration of a Joseon dynasty masterpiece and its secrets. Conflicts arise between "Bae Tae-jin" and the art restoration expert she hires, "Lee Kang-jun", played by actor Kim Rae-won.

Uhm has starred in numerous silver screen features, such as "Marriage Is a Crazy Thing", "For Horowitz" ("My Piano") and "Singles". Currently, she is promoting the music from her latest album.