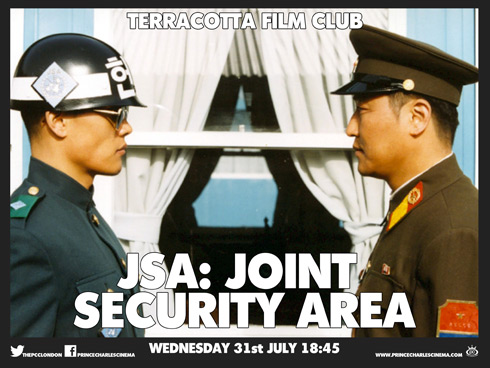 The screening on 31 July follows days after the 60th anniversary of the ceasefire agreement between North and South Korea on 27 July.

"JSA - Joint Security Area" is a tense thriller where an incident one night jeopardises the delicately balanced North and South Korean ceasefire agreement.
A box office smash in its country back in 2000, it features a younger Lee Byung-hun, who is now enjoying global stardom since he landed in the G.I. JOE franchise and RED 2. Prolific actor Song Kang-ho will also be in the international spotlight soon with the highly anticipated release of "Snowpiercer".

In August, Terracotta Film Club will be playing the dark thriller romance REVENGE: A LOVE STORY. A serial-killer targeting pregnant women on the loose to coincide with Frightfest.

Synopsis:
Set on the volatile Demilitarised Zone between the South and the communist North Korea. After a confused incident at night, where both sides open fire at each other, one North Korean soldier is killed and a South Korean soldier is injured. Hoping to avoid an escalation in the crisis, both sides agree to allow neutral Korean-Swiss investigator Sophie Jean (Lee Young-ae, "Sympathy for Lady Vengeance") to look into the case. When she discovers discrepancies in the amount of bullets fired from each soldier's gun that night, and when witnesses try to commit suicide rather than talk to her, Jean realises that the truth behind the shooting is much more explosive. Stars Lee Byung-hun (RED 2, GI JOE, "A Bittersweet Life") and Song Kang-ho ("Snowpiercer", "The Host").

"[UK] Park Chan-wook's "JSA - Joint Security Area" at the Prince Charles Cinema on Wednesday 31 July"
by HanCinema is licensed under a Creative Commons Attribution-Share Alike 3.0 Unported License.
Based on a work from this source