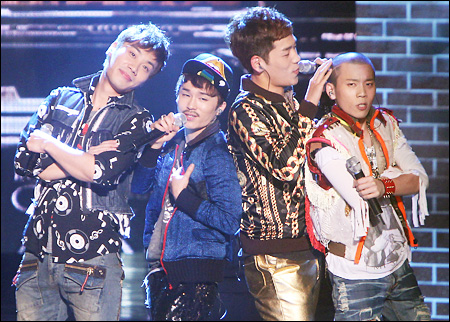 The audience watched with trembling excitement and anticipation early Saturday - around 1 a.m. - as Ulala Session was announced the winner of Mnet's "Superstar K3" in Jamsil Gymnasium, southern Seoul.

After months of battling other talented artists, the four-member band earned 500 million won in cash and a chance to perform at the Mnet Asia Music Awards in Singapore on Nov. 29. The band will also release a single and a music video for "With You", the song they performed on the final stage.

Lim Yoon-taek, 32, Park Seung-il, 31, Kim Myung-hoon, 29, and Park Kwang-sun, 22, cried with joy and invited their parents onto the stage. Leader Lim, who is suffering from stomach cancer, thanked the band members in trusting him in this fierce journey.

"We owe this to our parents and fans who believed in us. Someone once told me that a band is not made up of talented people but of people who can sacrifice everything else for their dreams", Lim said, in an interview held shortly after the final round.

Lim said that they have not slept much since the first epi¬ sode aired and that it was tough to live up to expectations of people who thought they were naturally good.

Park Seung-il, who called their win a miracle, could not continue his speech because of tears.

On his health, Lim said that he is actually in good shape. "My doctor thinks it's sad that people think I am so sick when I am actually really healthy". Lim said his optimism played a crucial role in the improvement of his condition.

For the final duel between Ulala Session and Busker Busker that began 11 p.m. Friday, Jamsil Gymnasium was packed.

The third edition of "Superstar K3" was the first where groups were allowed entry, and the competition between the two groups to the top is regarded to have enlivened the audition program.

The two finalist groups were required to perform one rendition and one track produced specifically for the each group by producers Kim Do-hun and Park Geun-tae.

Both groups faltered in the first part of the final round - their performances of the renditions. Busker Busker opened with a version of Lee Su-young's "I Believe", a sorrowful tune about losing a lover but the band's funky arrangement replaced the original's despondent lover with almost casual acceptance and a sense of moving on. It was clear that the audience had expected something more melodic when the crowd fell into an awkward silence once the song began.

Judge Lee Seung-chul said "The rendition did not show any characteristic of the original. It seems like you focused more on changing the song than the song itself". He gave the group 88 points. Yoon Mi-rae and Yoon Jong-shin, who also commented on the stability that the band has achieved, gave 93 and 91 points respectively.

Ulala Session did not fare any better with its rendition of "I am Happy" by Lee So-ra, which is also about the pain of losing someone. The band masterfully kept the femininity of the original, but the emotions were exaggerated with some members' near-sobbing sounds.

Lee called it the band's worst performance ever, saying he did not enjoy listening to the song because the exaggerated sadness was insincere. "I think it worked because the four of you took turns. I think the expression of emotions was good but in a technical sense you did not meet expectations. This performance revealed that Ulala Session has a weakness in performing on a stage without dancing", Yoon Jong-shin said. The scores were not as harsh as the comments; the group received 91, 97, and 95 points from the three judges.

Fortunately, the finalists were able to show all of their talent and passion in performing tracks produced specifically for them by the composers and lifted the spirits of an audience that was somewhat disappointed by the previous songs.

Busker Busker performed "Seoulites", a vintage and fun mood-bumper about the fast lives of people living in Seoul. Lee called leader and vocalist Jang Bum-jun, 23, a natural. Lee said songs that reflect contemporary lives like "Seoulites" are hits and gave the group 95 points. The two other judges gave them 96 and 95 points.

Ulala Session dominated the stage with "With You". The performance was a series of dazzling dance moves and impeccable vocals by all four members. The audiences as well as the judges were stunned. After an uproar of cheers, Lee said "I want to go to your concert. K-pop is limited in genres - I think Ulala Session will extend K-pop's horizon. Thank you and it's been a pleasure". He gave a jaw dropping 98 points as did Yoon Jong-shin, followed by Yoon Mi-rae who gave 97 points. Yoon Joon-shin said, "This was an ambitious song and an ambitious dance. Why did the producer give Ulala Session this track? Because they are professionals".

Huh Gak, the "Superstar K2" winner, graced the finale by debuting a new track "I Can Only Say I Want to Die". Then, all 11 contestants of Superstar K3, except Chris Golightly who could not attend, staged "When Tomorrow Comes".

Now with the competition over, Ulala Session wants some time to rest before working with Shin Ji-su, Christina Love Lee as well as other contestants from the show. leann.noh@koreatimes.co.kr

"Ulala Session takes 'Superstar K3'"
by HanCinema is licensed under a Creative Commons Attribution-Share Alike 3.0 Unported License.
Based on a work from this source